Ossian's Hall of Mirrors is a Georgian folly in the estate of The Hermitage in Dunkeld, Perthshire.

It was built for the Duke of Atholl and today it is in the care of the National Trust for Scotland, as part of a wider estate acquired from the Dukes. 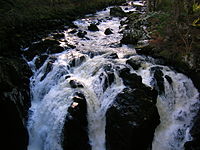 The River Braan, from Ossian's Hall

Ossian's Hall of Mirrors was originally built as an unremarkable viewing house in the grounds of The Hermitage, in a position overlooking the Black Linn falls of the Braan, a tributary of the River Tay. The house was built on a rocky outcrop for James Murray, 2nd Duke of Atholl, in 1757.[1] 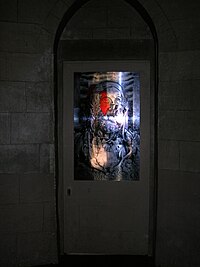 An image of Ossian on an internal door

The Hermitage was redecorated in 1783 as a shrine to the legendary blind bard, Ossian.[2] Ossian is supposed to have lived and written his heroic verse around the 3rd century.

The redecorated hall was intended to evoke features of 'shock' and 'amazement' in the viewers' minds; the room from where views of the waterfall were taken was lined with mirrors which made the spectator imagine that the water was appearing from all angles. William Wordsworth composed a poem which described the 'World of Wonder' in this room. Another description states that in the 1780s, visitors entering were met by a painting of Ossian serenading a group of maidens. The guide operated a device that withdrew the painting into the wall, providing access to another room - a hall of mirrors - giving the illusion of water pouring all around reflecting the river cascading outside.

In 1803 the hall had walks that were intersected, here and there, by a small garden of fine flowers among rocks and stones'. These small-scale gardens have since gone.

Early literary accounts of the Hall of Mirrors 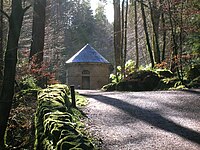 A view from the rear of Ossian's Hall

Garnett in 1800 visited the site. He describes the 'Hall of Mirrors' as having its sides and ceiling covered with mirrors, in which "the cascade is seen by reflexion, sometimes running upwards, contrary to the direction of gravity, and sometimes in a horizontal stream over the head."[4]

The decline and restoration of the site

In 1869 vandals blew up part of Ossian's Hall and the area was left to decay. In 1943, Katharine Stewart-Murray, Duchess of Atholl, donated the hall and 33 acres of, by then, coniferous woodland along the banks of the River Braan to the National Trust for Scotland in accordance with the wishes of the late Duke. The National Trust for Scotland has restored the building for the use and enjoyment of the public.