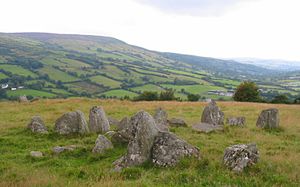 Ossian’s Grave, otherwise known as the Lubitavish Court Tomb, is a "court cairn", a form of megalithic chambered grave typical of Neolithic sites in Ulster and other locations in the British Isles. A fine example of a court cairn, Ossian's Grave is to be found in the townland of Lubitavish to the north-west of Cushendall in County Antrim.

The tomb lies on the north-east slope of Tievebulliagh, beside Glenaan, one of the famed Nine Glens of Antrim.

The name of the tomb links it to the legendary warrior poet Ossian who local legend insists lies here. One legend asserts that Ossian was a son of the giant Finn MacCool (who never seems to escape any local tale). More famously, Ossian wrote the soaring verses the publication of which launched a new school of poetry within the later eighteenth century Romantic movement – or so it was believed by many until it was discovered that they were all the work of James Macpherson. In sober reality, if that is possible, the site is a Stone Age grave, and not that of an Iron Age warrior-bard.

Ossian's Grave is a Scheduled Ancient Monument and a state care monument.

The remnants of these relatively small stones built megalithic system were taken by a low oval cairn, which is today however disfigured. Only two of its curb stones are preserved on the north side. The semicircular, southeast-facing forecourt is in front of the narrow gallery, which consists of two consecutive chambers. Ossian's grave has not been dug up.

Of the several forms of Stone Age graves found across the British Isles, court tombs are a variant found principally in Ulster and the northern parts of Ireland, where about 400 examples have been discovered. Ossian's Grave is the best known of the estimate 18 court cairns found in County Antrim. The layout in this case is of a 'horned' cairn or 'lobster tomb', and it is believed to have been built in the early Neolithic period, about 3500 BC. 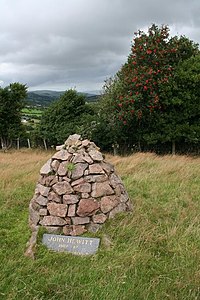 A memorial was raised here in 1989, beside the ancient tomb, to John Harold Hewitt (1907–1987), known as the 'Poet of the Glens'. Born in Belfast but shunned from polite Unionist society for his unfortunate left-wing political opinions in his early years, he was a prolific writer, taking inspiration from the Ulster weaver poets, and from the landscape and its people.

This is my country; my grandfather came here
and raised his walls and fenced the tangled waste
and gave his years and strength into the earth