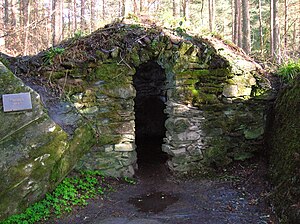 The entrance to Ossian's Cave

Ossian’s Cave is found in the states of The Hermitage, a former country house of the Dukes of Atholll near Dunkeld in Perthshire. Today the house, the gronuds and the cave are owned by the National Trust for Scotland.

The cave is an enhanced natural feature, reshaped to create a folly: several large boulders have been employed to form part of the cave, and these have been joined with undressed stone to form the roof and sides of the cave, with two small, irregular windows and a round headed doorway added.

The corbelled roof is made up of stones, set on edge and mortared into place. It is only one stone in thickness. To the left of the doorway, inside the cave, is a low stone seat, 5 feet long a foot off the ground. The whole structure is only part mortared together, making its overall condition somewhat precarious. Steps have been taken to revegetate the top in recent years.

The dates of the cave and stone seat, below, are not exactly known. Estate records suggest that the cave was possibly built in 1755, before the estate's other Ossianic wonder, Ossian's Hall of Mirrors. There are no visitors’ accounts though until 1776, suggesting that the earlier structures are different.

There was an inscription in the cave, purporting to be a poem by Ossian, but this no longer survives.[1]