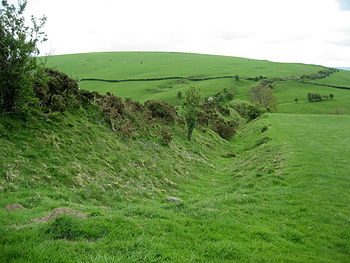 Offa's Dyke (Welsh: Clawdd Offa) is a massive linear earthwork running north-south in a line once perhaps 150 miles long, roughly approximating the boundary between modern England with Wales. In places, it is up to 65 feet wide (including its flanking ditch) and 8 feet high.

The work is a defensive earthwork, consisting of a classic bank and ditch. The ditch is to the west, showing it to have been built to defend the Mercian side to the east.

The dyke was created in the 8th century to form a delineation between the English kingdom of Mercia and the Welsh kingdom of Powys. It is attributed to King Offa, under whom Mercia reached the pinnacle of its power. 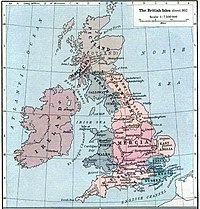 The British isles in AD 802, showing Offa's Dyke between the Mercian and Welsh kingdoms

Schematic cross-section of Offa's Dyke, showing how it was designed to protect Mercia against attacks/raids from Powys 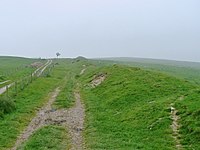 A section of Offa's Dyke

It is generally accepted that much of the earthwork can be attributed to Offa, King of the Mercians from 757 to 796. Its is dug as a bank and ditch, the displaced soil piled into a bank on the Mercian (eastern) side, to produce a formidable barrier against attack from the west. Where the earthwork encounters hills, it passes to the west of them, constantly providing an open view from Mercia into Wales. The dyke is in form a defensive earthwork, and a political statement of power, as well as a practical boundary marker emplaced after centuries of warfare and shifting boundaries.

Offa was one of the great rulers of the Anglo-Saxon age, though his reign is often overlooked due to a limitation in source material. That he was able to raise a workforce and resources sufficient to construct such an earthwork as Offa's Dyke is testament to his power. It is likely that some form of 'service' system along the lines of corvée was used to construct the Dyke, with people from certain areas being required to build a certain length of the wall. This can be seen as additional to the normal services that had to be offered to kings. A document exists from around this period known as Tribal Hidage, which makes some assessment of how land was distributed in the 8th century. Though there is little evidence to associate the document with the Dyke, it is possible that both the Dyke and the document stem from a common practice.

The late 9th- and early 10th-century writer Asser informed us that "there was in Mercia in fairly recent time a certain vigorous king called Offa, who terrified all the neighbouring kings and provinces around him, and who had a great dyke built between Wales and Mercia from sea to sea" (Asser, Life of Alfred, p. .14). The last four words are vital: historians and archaeologists coming to the Dyke have had Asser in their hand, and have been looking for an earthwork 'from sea to sea'. Sir Cyril Fox completed the first major survey of the Dyke (Fox 1955), and, in agreement with Asser, theorised that the Dyke ran from the estuary of the River Dee in the north to the River Wye in the south (approximately 150 miles). He observed that the dyke was not continuous, and thought it was built only in areas where natural barriers did not already exist.

Frank Stenton, the eminent Anglo-Saxon historian of his day, accepted Fox's description, and wrote the introduction to Fox's account of the Dyke. Though Fox's work has now been to some extent revised, it remains a vital record of stretches of the Dyke that still existed between 1926 and 1928, when his three field surveys took place, but that are now destroyed.

Frank Noble challenged Fox's legacy. His greatest contribution was to stir up new academic interest in Offa's Dyke. His MPhil thesis, "Offa's Dyke Reviewed" (1978), raised several questions. Noble postulated that the gaps in the Dyke were not due to natural features, but that instead a "ridden boundary" operated, perhaps incorporating palisades that left no archaeological trace. Noble also helped establish the Offa's Dyke Association, which maintains the Offa's Dyke Path. This long distance footpath mostly follows the route of the dyke, which is one of the designated British National Trails.

Ongoing research and archaeology on Offa's Dyke has been undertaken for many years by the Extra-Mural department of the University of Manchester. Most recently David Hill and Margaret Worthington have undertaken considerable research on the Dyke. Their work, though far from finished, has demonstrated that there is little evidence for the Dyke's stretching from sea to sea. Rather, they claim that it is a shorter structure stretching from Rushock Hill north of the Herefordshire Plain to Llanfynydd, near Mold in Flintshire, some 64 miles. According to Hill and Worthington, dykes in the far north and south may have different dates, and though they may be connected with Offa's Dyke, there is as yet no compelling evidence behind this. However, not all experts accept this view.[1]

The Roman historian Eutropius in his book, Historiae Romanae Breviarium, written around 369, mentions the Wall of Severus, a structure built by Septimius Severus who was Roman Emperor between 193 and 211:

He had his most recent war in Britain, and to fortify the conquered provinces with all security, he built a wall for 133 [Roman] miles from sea to sea. He died at York, a reasonably old man, in the sixteenth year and third month of his reign.

This source is conventionally thought to be referring, in error, to either Hadrian's Wall (73 modern miles) or the Antonine Wall (37 modern miles), which were both much shorter and built in the 2nd century.[2] Bede referred to hadrian's Wall as the Wall of Severus. Most archaeologists reject the theory that Eutropius was referring to an early Offa's Dyke.[3][4][5]

In December 1999 Shropshire County Council archaeologists uncovered the remains of a hearth or fire on the original ground surface beneath the raised bank of the ancient Wat's Dyke near Oswestry. Carbon dating analysis of the burnt charcoal and burnt clay in situ showed it was covered by earth on or around AD 446. Archaeologists concluded that this part of Wat's Dyke, so long thought of as Anglo-Saxon and a mid-8th century contemporary of Offa's Dyke, must have been built 300 years earlier in the post-Roman period in Britain.[6] 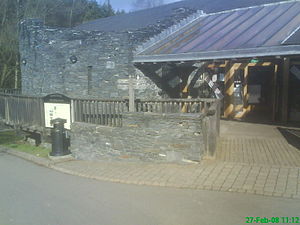 The Offa's Dyke Centre is a purpose-built information centre in the town of Knighton, a town which stands on Offa's Dyke and across the border between Radnorshire and Shropshire: in Welsh the town is called Tref yn Clawdd, menaing "Town on the Dyke". Some of the best remains of the earthworks can be seen within a two-minute walk from the centre.

The Offa's Dyke Path is a long distance footpath running from the Severn to the Irish Sea along and beside Offa's Dyke for much of the way. Opened in 1971, it is one of Britain's longest National Trails, stretching for 176 miles from the Severn estuary at Sedbury, near Chepstow, to Prestatyn in Flintshire, on the Irish Sea coast.[7] There is a visitor centre at Prestatyn.

The Dyke has in some cases been brought into common folklore, though this should not be seen as historical evidence for the purpose behind the Dyke.

Today, the boundaries of the Welsh and English counties still mostly follow the dyke through the Welsh Marches. It has a cultural significance, symbolising in the popular imagination at least the separation between the two cultures, similar to the symbolism of Hadrian's Wall for Scotland and England.

A three-mile section of the dyke, which overlooks Tintern Abbey and includes the Devil's Pulpit near Chepstow, is now in the care of English Heritage.