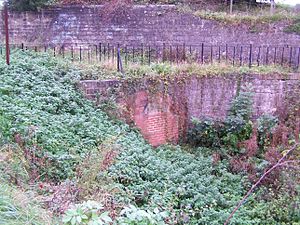 The Eastern Portal of Norwood Tunnel

The Norwood Tunnel was a 2884-yard-long, 9¼-foot-wide and 12-foot-high brick-lined canal tunnel on the line of the Chesterfield Canal with its western Portal close to Norwood, Derbyshire and its Eastern Portal in Kiveton, Yorkshire.[1] The western portal is about half a mile from the county border, so the tunnel is entirely in Yorkshire.

At the end of July 1775 an auction of equipment, which had been used to construct the tunnel, was held at the eastern portal:-

The Manchester, Sheffield and Lincolnshire Railway (MSLR) purchased the Chesterfield Canal in 1847. It has long been claimed that the tunnel was lengthened/shortened when a railway was built nearby, but a map of the "proposed" Manchester & Lincoln Union Railway, 1845 shows the portals in their current locations. [4]

A large colliery was developed above the tunnel, operated by the Kiveton Park Colliery Company. The removal of coal from seams under the tunnel caused major subsidence problems - segments began to sink. As the water level was constant the roof became nearer to the water surface. In 1871 the MSLR started what would be twenty years of roof-raising to keep Norwood Tunnel passable.[5] The total cost was £17,043, said to be £7 per linear yard. The raising of practically the whole length of the tunnel roof was done by prolonging the side walls and rebuilding the semi-circular arch.[6] It is this work that obfuscates the originality or otherwise of the construction shafts.

After days of heavy rain a 12–14 yard section of the tunnel collapsed on 18 October 1907, leaving a large hole in a field near the road to Harthill. With only minimal boat-traffic on the declining canal the cost of repairing the fall could not be justified and the tunnel has remained blocked ever since, splitting the canal into two sections. 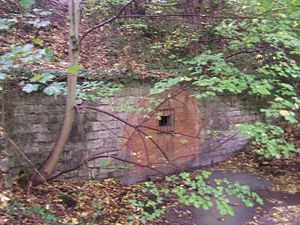 The Western Portal of Norwood Tunnel in 2006