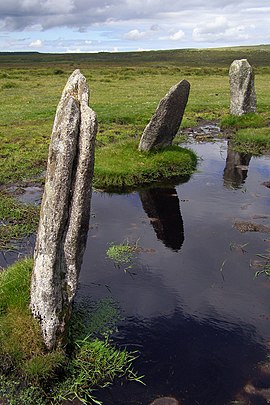 Three of the Nine Stones

The Nine Stones stand on Bodmin Moor, one of several circles on the moor, and one of smallest of them. It is 49 feet in diameter with eight granite stones forming the circle and one in the centre. The circle was restored in 1889, at which time only two stones remained standing.

A flat triangular shaped stone also lies at the base of one of the stones. The stones are irregularly spaced with the tallest 4 feet 2".. A gap in the north suggests where another stone may have stood.[2] The central stone, a granite post 11 feet high, may have been moved from the north part of the circle to be used as a boundary stone for the parish boundary.[3]

There are hut circles 600 yards to the northeast and another to the south.[4]