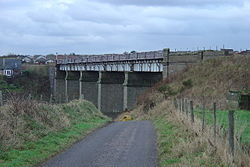 Newtonhill is a commuter village in Kincardineshire. It is popular due to its location, just six miles south of Aberdeen with easy reach of Stonehaven and with views over the North Sea.

The village, originally called Skateraw, has three commercial outlets; two convenience stores and a pharmacy, which also hosts a weekly post office. There are two pubs in the village, Quoiters and The Newton Arms. Local events centre on the community centre, The Bettridge Centre, which is run by villagers. Beside this centre is the local library. There is also the Skateraw Hall, originally provided for the residents when Newtonhill was a fishing village.

Newtonhill Primary School serves the village and surrounding hamlets of Muchalls and Cammachmore.

Skateraw was a fishing village, and the older part of the village between the railway line and the sea reflects that heritage though nearly all of the old houses have been modernised and extended. An old smoke house is still visible in Skateraw Road, though it is many years since it was in use. The village had a railway station which lead to the change of name from Skateraw to Newtonhill but it was closed in 1956; the signal box remains in use and remnants of a platform can still be seen. There is an enthusiastic historical society in the village.

Newtonhill today is accessed by the A90 road and functions primarily as a commuter town to Aberdeen and other business hubs in the area. The village is also well served by buses providing regular services to Aberdeen, Stonehaven and Montrose.

Newtonhill has a successful Boys Brigade chess team which has won the Scottish tournament many times and have won the British grand finals the most out of all British teams. There is an active community spirit in Newtonhill and many events are organised through the [2] Newtonhill and District Village Association, with wider planning issues being discussed by the Community Council. 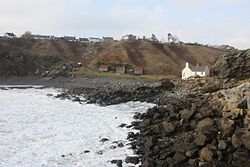 The Bay at Newtonhill, which features several caves

The Burn of Elsick, which drains agricultural lands from the west, flows into the North Sea at Newtonhill. The White Wife is a rock formation which allows sea angling. Newtonhill also has a great scenic views of the cliffs looking on to the pebble shore, where fishing still a custom to many.

Newtonhill is situated about half a mile east of the ancient Causey Mounth road, which was built on high ground to make passable this only available mediæval route from coastal points north to Aberdeen. This ancient passage specifically connected the Bridge of Dee via Portlethen Moss, Muchalls Castle and Stonehaven to the south.[1] The route was that taken by William Keith, 7th Earl Marischal and the Duke of Montrose when they led a Covenanter army of 9,000 men in the first battle of the First Bishop's War in 1639.[2]