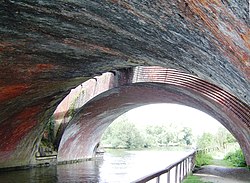 The bridges from underneath with the original closest

Moulsford Railway Bridge, known locally as "Four Arches" bridge[1] is a pair of parallel bridges located a little to the north of Moulsford, Berkshire. It carries the Great Western Main Line from Paddington, London to the West across the River Thames. It lies between the stations at Goring & Streatley and Cholsey, and crosses the Thames at an oblique angle on the reach between Cleeve Lock and Benson Lock. It is a Grade II* listed structure.[2]

The original bridge was designed to carry two broad-gauge tracks by Isambard Kingdom Brunel for the Great Western Railway and was built between 1838 and 1839, at the same time as Maidenhead and Gatehampton railway bridges. It is constructed from red brick with Bath stone quoins as four elliptical skew arches of 62 ft span and a headway height of 21 ft 8 in.