Moulsford is a village in Berkshire, sitting by the River Thames, just north of Streatley and south of Wallingford. The western part of the parish is taken up by the foothills of the Berkshire Downs, including the Moulsford Downs (a site of special scientific interest), Moulsford Bottom and by Kingstanding Hill. Kingstanding Hill is traditionally associated with King Alfred and the Battle of Ashdown. Like many other villages in north Berkshire, it has been used for the filming of the BBC's Midsomer Murders.

The Bronze Age 'Moulsford Torc' was discovered in the parish and bought by the Museum of Reading with the aid of a grant from the Art Fund in 1961. It is a hoop-shaped decorative neck ornament, made of four spirally-twisted gold-alloy strips held together by a delicate piece of twisted gold wire.

In the Middle Ages Moulsford Manor was the English home of the powerful Carew family[1] who also held Carew Castle in Pembrokeshire.

Just north of Moulsford is Moulsford Railway Bridge on the Great Western Main Line, designed by Isambard Kingdom Brunel and built in 1838-1839.

The Beetle and Wedge east of the village is a public house on the River Thames, on the site of a former ferry crossing. 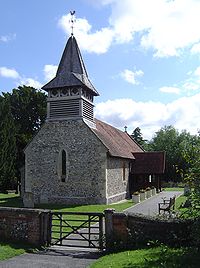 Moulsford's parish church is St John the Baptist, originally a mediæval church but so extensively rebuilt in the nineteenth century that it is today a fine Victorian church.

The original church began as a chapelry of Cholsey.[2] The first known record of the chapel dates from between 1220 and 1227.[2] The botanist and geologist John Stevens Henslow was its vicar in the 1830s.

In 1846, most of the mediæval church was demolished and the current church, designed by Sir George Gilbert Scott, was built on its foundations.[2] Scott's Gothic Revival building retains the west wall of the original church, which includes a 13th-century Early English Gothic lancet window, and the timber frame of the bellcote.[2] 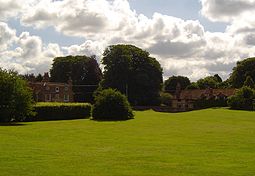