Motherwell is a town and former burgh in Lanarkshire, found to the south east of Glasgow. The name "Moderwelt" appears on a map of Lanarkshire made by Timothy Pont some time between 1583 and 1611 and printed in the Netherlands in around 1652, although the settlement was probably little more than a hamlet at that time. The town was a burgh from 1865 until it merged with the burgh of Wishaw in 1920.

Motherwell was noted as the steel production capital of Scotland, nicknamed Steelopolis, home of David Colville & Sons during the 19th and 20th centuries, with its skyline later dominated by the water tower and three cooling towers of their Ravenscraig steelworks which closed in 1992. The Ravenscraig plant had one of the longest continuous casting, hot rolling, steel production facilities in the world before it was decommissioned. The closure of Ravenscraig signalled the end of large scale steel making in Scotland, although the town's Dalzell works continues to be operated by Tata Steel Europe.

In the past decade, Motherwell has to an extent recovered from the high unemployment and economic decline brought about by this collapse of heavy industry. A number of call centres and business parks such as Strathclyde Business Park have since set up in the region. Large employers include William Grant & Sons whisky distillers and blenders. Local government and the police employ large numbers. 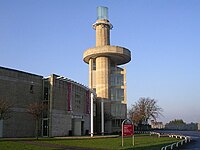 There are many places of interest that have made Motherwell an unlikely sttraction for visitors. As well as the town's Country Park, The Motherwell Heritage Centre on High Road, found next to the town’s railway station, displays the history of Motherwell from the Roman era. The building also has a viewing tower on the fifth floor giving visitors a good view of the town and other parts of Lanarkshire.

Motherwell also has a Civic Centre, situated next to the town's police station and local council’s headquarters building. A number of pantomimes and musicals have taken place in the centre’s large concert hall.

The Dalzell House is a building that is situated to the South of the town, right on the banks of the River Clyde. This house is protected as a Category-A listed building. 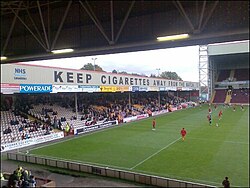 Motherwell Football Club was established in 1886. Known as the "Steelmen" because of the history of steel making in the area, they play in the Scottish Premier League from their home ground at Fir Park Stadium. Like many smaller clubs in the area, Motherwell struggle to attract a large fanbase due to the attraction of Glasgow's "Old Firm" of Rangers and Celtic. However, the team attracts a regular home support of between five and six thousand fans. Also, the club is known to be one of the most established clubs in the top flight, having been in the top flight since the mid-1980s.

Motherwell hosted motorcycle speedway racing at two venues. In 1930 and 1932 racing took place at a site in Airbles Road and the 1930 speedway venture was known as Paragon Speedway. The venture was run by a group of riders who were regulars at White City in Glasgow and known collectively as The Blantyre Crowd.

Speedway returned to the town in 1950 and the then newly constructed greyhound racing stadium in Milton Street. The Lanarkshire Eagles]] staged open meetings from July to September 1950. In 1951 the Eagles started out in the National League Second Division and operated until the end of the 1954 season.

Dalziel Rugby Club play at Dalziel Park (formerly Cleland Estate) between the villages of Carfin and Cleland (both near Motherwell).

Athletics is becoming a more common sport in Motherwell, as the town has a number of athletics clubs in different locations. Usually they are based at numerous primary and secondary schools at night, although in recent years there have been top class sports facilities being built just outside the town, first Dalziel Park and most recently the Ravenscraig Regional Sports Facility, with the latter containing a top-class indoor athletics track. The sports facility in the new town of Ravenscraig was one of the main venues for the 2011 International Children's Games in Lanarkshire, and will host the athletics event.

The largest "Fun Park" in Scotland is based within Strathclyde Park in the Motherwell vicinity, known as M&Ds. Strathclyde Park contains many sports and leisure facilities and also has sites for bird-watchers and anglers. The woodland and grass areas are ideal for picnicking and leisurely strolls. Excavations in the park have revealed a site of archaeological interest including a Roman mosaic, Roman bath house and bridge. Strathclyde Park is also on the site of the former mining village, Bothwellhaugh: much of the village drowned after it was abandoned.