The foundation was created in the early Anglo-Saxon period, in the Kingdom of Northumbria. Jarrow became the centre of Anglo-Saxon learning in the north of England, producing the greatest Anglo-Saxon scholar, Bede.

The twin Anglo-Saxon monastery was the British nomination for World Heritage Site status in 2011.[1] 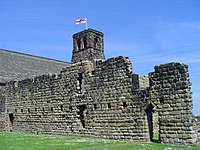 Monastery remains at Jarrow in front of St Paul's Church

The monastery was founded in 674 by Benedict Biscop, first with the establishment of the monastery of St Peter's, Monkwearmouth on land given by Egfrid, King of Northumbria. His idea was to build a model monastery, sharing his knowledge of the experience of the Roman traditions in an area previously more influenced by Celtic Christianity stemming from missionaries of Melrose and Iona. A papal letter in 678 exempted the monastery from external control, and in 682 the king was so delighted at the success of St Peter's, he gave Benedict more land in Jarrow and urged him to build a second monastery. Benedict erected a sister foundation (St Paul) at Jarrow, appointing Ceolfrith as its superior, who left Monkwearmouth with 20 monks (including his protégé the young Bede) to start the foundation in Jarrow.

Benedict brought workmen from the Kingdom of the Franks to build these churches, said to be the first ecclesiastical structures in Britain built of stone, and furnished it with glass windows, pictures, service books and the library he had collected on his travels. Benedict imported glassmakers from the Franks, who established a workshop at the Monkwearmouth site,[2] which stands on a nearby site on the river Wear.

The two monasteries were so closely connected in their early history that they are often spoken of figuratively as one, Jarrow, despite being seven miles apart. Benedict himself was the first abbot, and the monastery flourished under him and his successors Eosterwine, Ceolfrith, and others, for two hundred years. Benedict, on leaving England for Rome in 686 established Ceolfrith as Abbot in Jarrow and Eosterwine at Monkwearmouth[3] but, before his death, stipulated that the two sites should function as 'one monastery in two places'.

Ceolfrith as abbot continued Benedict's work in establishing the monastery as a centre of learning, scholarship, and especially book production, during which time a distinctive house style of half-uncial script emerged. Ceolfrith's major project was the production of three great "pandect" Bibles (which is to say manuscripts containing the entire text of the Bible), intended to furnish the churches of St Peter's and St Paul's, with the third copy earmarked as a gift to the Pope. The only survivor of the three bibles is the Codex Amiatinus, now in Florence, the oldest complete surviving Bible in the world, which was being carried to Rome by Ceolfrith himself when he died in 716. The Bible was carried to Rome by his companions, whence Pope Gregory II sent his thanks to Ceolfirth's successor, Abbot Hwaetberht.

The library Benedict had created on his travels to Rome and then given to the monastery made it the cradle not only of English art but of English literature – Jarrow is where the Venerable Bede received his early education under Ceolfrith's patronage and lived, wrote and died as a monk. By his death Bede had established himself as England's leading scriptural and historical authority, and was to have a vital post-mortem influence on the fortunes of the monastery. Bede's writings, most importantly his Historia ecclesiastica gentis Anglorum ('Ecclesiastical History of the English People'), became so popular in the 8th century that they not only assured the reputation of the houses, but influenced the development of Monkwearmouth-Jarrow's distinctive insular minuscule script, developed to increase the speed of book production.

The golden age of Monkwearmouth-Jarrow began to draw to a close in the late 8th century, as Northumbrian monasteries became vulnerable to Viking raids, with Monkwearmouth-Jarrow itself being attacked in 794 (the second target in England of the Vikings, after raids on Lindisfarne in 793). They were finally destroyed by the Norsemen about 860, and seem to have been finally abandoned in the late 9th century.

In the early 1070s Aldwin, prior of Winchcombe Abbey, was inspired by Bede's Historia to tour the sites of the Northumbrian Saxon saints, including Jarrow where he held masses in the Saxon ruins and began (with his 23 colleagues from Evesham Abbey) to build a new monastery. However, its southern and western ranges were still incomplete when they were recalled to Durham Cathedral Priory in 1083. From then until the Dissolution, Jarrow was merely a minor cell of Durham, occupied by only one or two monks under a magister or master. The names of only two of these superiors have been preserved-those of Alexander Larnesley and John Norton.

After the Conquest, both monasteries suffered at the hands of Malcolm III of Scotland.

The Monastery was later dissolved by Henry VIII. In 1545 "all the house and seite of the late cell of Monkwearmouth", valued at about £26 yearly, were granted by Henry VIII to Thomas Whitehead, a relative of Prior Hugh Whitehead of Durham, who resigned that monastery in 1540 and became the first dean. Monkwearmouth passed afterwards to the Widdrington family, then to that of Fenwick. The remains of the monastic buildings at Monkwearmouth were incorporated into a private mansion built in James I's reign; but this was burned down in 1790, and no trace is now visible of the monastery. The parish registers, with the exception of some late entries, were destroyed in the fire and, no doubt, information of untold value was lost.

The present parish church of St Peter's at Monkwearmouth (54°54’47"N, 1°22’30"W), on the north bank of the River Wear, occupies the ancient priory church building and is one of the oldest churches in Great Britain. The tower dates from Norman times, and doubtless formed part of the building as restored after the Conquest. The church is now part of the Parish of Monkwearmouth, which also includes All Saints' Church and St Andrew's Church. It is adjacent to the St Peter's Campus of the University of Sunderland and the National Glass Centre.

The ruins of the Jarrow Monastery are now associated with the former monastic church, which survives as the present-day church of St Paul (54°58’49"N, 1°28’20"W). The Saxon-Norman nave collapsed and was replaced with a Victorian one, but the Saxon chancel survives, with the oldest stained-glass window in the world, made up of excavated fragments dating from about AD 600. Inside the church, cemented into the wall of the tower, is the original stone slab recording the dedication of the church on 23 April 685. Other than the chancel of St Paul's Church, none of the 7th century monastery survives above ground, but its layout is marked out with stone slabs. The whole site is a Scheduled Ancient Monument. 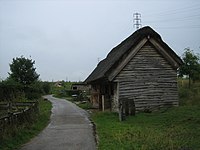 The reconstructed farm at 'Bede's World'

Near the remains at Jarrow is Bede's World (54°58’57"N, 1°28’26"W), a museum dedicated to the life and times of Bede and to celebrating Anglo-Saxon cultural achievements, including a working example of a reconstructed Anglo-Saxon farm called Gyrwe (pronounced 'Yeerweh') after the Old English name for Jarrow, showing crop and animal husbandry with full-size reconstructions of 3 timber buildings from Northumbria based on the evidence of archaeological work. The farm animals are specially bred to simulate the type of animal seen in Anglo-Saxon England; cattle are smaller and sheep more varied. Ancient strains of wheat and vegetables, such as those Bede and his monastery brothers might have eaten, are grown. There are also interactive museum displays, with a permanent 'Age of Bede' exhibition and a collection of Anglo-Saxon to post Mediæval objects (mainly excavated from the monastic site of St Paul's, Jarrow), the historic and listed Jarrow Hall and a herb garden.

Manuscripts written in the Abbey

The Novem Codices and Codex Grandior were formerly part of the Library, though written in Italy.