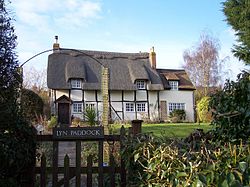 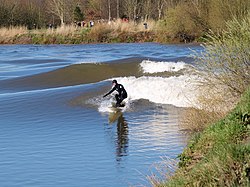 Minsterworth is a village in western Gloucestershire. It lies to the west of the City of Gloucester, on the north bank of the River Severn (effectively on the western side of the river) and on the A48 road between Gloucester and Chepstow.

The village has a long history, at one stage being owned by the rebellious baron Simon de Montfort. Its economy used to be heavily involved with salmon-fishing in the Severn, as illustrated by a carving in the local church of three salmon caught in a fishing net. Fishing for elvers remains an important activity. The local church, St Peter's, lies right next to the river, with three ancient yews in the churchyard. It was rebuilt by Henry Woodyer (who had earlier worked on the nearby church in Highnam) in 1870, but contains many older features such as a fifteenth-century baptismal font, a Jacobean-era pulpit and part of a fourteenth-century cope.

The village has a church (St Peter's), a primary school (Minsterworth C of E) and a village hall. The Severn Bore Inn, butchers shop and waterski club, often attributed to the village, actually lie outside the parish boundary. It also has a number of listed buildings dating from the 16th, 17th and 18th centuries. [2]

The village is one of the best places to view the Severn Bore, where people can be seen surfing and water skiing from the local water ski club.