The Millennium Bridge, officially known as the London Millennium Footbridge, is a steel suspension bridge for pedestrians crossing the River Thames in London, linking Bankside in Southwark, Surrey with the City of London, Middlesex. On its opening it gained the nickname the "Wobbly Bridge".

The nickname the "Wobbly Bridge" arose on the very day of it opening as pedestrians on it felt unexpected swaying motion due to inadequate structural stability, which did not assist the architect's reputation. The bridge was closed later on opening day and, after two days of limited access, it was closed for almost two years while modifications were made to eliminate the motion. It reopened in 2002.

The Millennum Bridge is downstream of Blackfriars Railway Bridge and upstream of Southwark Bridge. It is owned and maintained by Bridge House Estates, a charitable trust overseen by the City of London Corporation. Construction began in 1998 and it initially opened in June 2000.

The southern end of the bridge is near the Globe Theatre, the Bankside Gallery, and Tate Modern, the north end next to the City of London School below St Paul's Cathedral. The bridge alignment is such that it provides a direct vista to the south façade of St Paul's, presented from across the river and framed by the bridge supports.

The design of the bridge was the subject of a competition organized in 1996 by Southwark council and RIBA Competitions. The winning entry was an innovative "blade of light" effort from Arup, Foster and Partners, and Sir Anthony Caro. Due to height restrictions, and to improve the view, the bridge's suspension design had the supporting cables below the deck level, giving a very shallow profile. The bridge has two river piers and is made of three main sections of 266 feet, 472 feet, and 354 feet (north to south) with a total structure length of 1,066 feet. The aluminium deck is 13 feet wide. The eight suspension cables are tensioned to pull with a force of 2,000 tons against the piers set into each bank — enough to support a working load of 5,000 people on the bridge at one time. 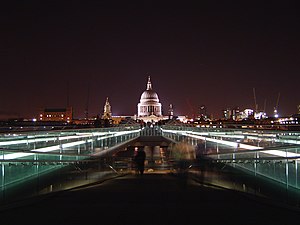 The bridge was built by the authority of a licence from the Port of London Authority.[1] Construction began in late 1998 and it was completed at a cost of £18.2M, primarily paid for by the Millennium Commission and the London Bridge Trust.[2] It opened on 10 June 2000, two months late.

Unexpected lateral vibration (resonant structural response) caused the bridge to be closed on 12 June 2000 for modifications. Attempts were made to limit the number of people crossing the bridge. This led to long queues but was ineffective to dampen the vibrations. Closure of the bridge only two days after opening attracted public criticism of it as another high-profile British Millennium project suffered an embarrassing setback, akin to how many saw the Millennium Dome. Vibration was attributed to an under-researched phenomenon whereby pedestrians crossing a bridge that has a lateral sway have an unconscious tendency to match their footsteps to the sway, exacerbating it. The tendency of a suspension bridge to sway when troops march over it in step was well known, which is why troops are required to break step when crossing such a bridge.[3] 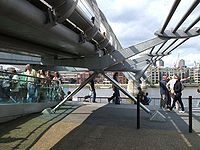 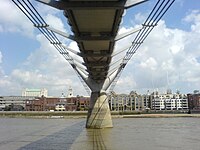 Underside of bridge from Southbank

The bridge's movements were caused by a 'positive feedback' phenomenon, known as synchronous lateral excitation. The natural sway motion of people walking caused small sideways oscillations in the bridge, which in turn caused people on the bridge to sway in step, increasing the amplitude of the bridge oscillations and continually reinforcing the effect.[4] On the day of opening, the bridge was crossed by 90,000 people, with up to 2,000 on the bridge at any one time.

Resonant vibrational modes due to vertical loads (such as trains, traffic, pedestrians) and wind loads are well understood in bridge design. In the case of the Millennium Bridge, because the lateral motion caused the pedestrians loading the bridge to directly participate with the bridge, the vibrational modes had not been anticipated by the designers. The crucial point is that when the bridge lurches to one side, the pedestrians must adjust to keep from falling over, and they all do this at exactly the same time. Hence, the situation is similar to soldiers marching in lockstep, but horizontal instead of vertical.

The lateral vibration problems of the Millennium Bridge are very unusual, but not entirely unique.[5] Any bridge with lateral frequency modes of less than 1.3 Hz, and sufficiently low mass, could witness the same phenomenon with sufficient pedestrian loading. The greater the number of people, the greater the amplitude of the vibrations. For example, Albert Bridge upstream has a sign dating from 1873 warning marching ranks of soldiers to break step while crossing.[6]

After extensive analysis by the engineers,[7] the problem was fixed by the retrofitting of 37 fluid-viscous dampers (energy dissipating) to control horizontal movement and 52 tuned mass dampers (inertial) to control vertical movement. This took from May 2001 to January 2002 and cost £5M. After a period of testing, the bridge was successfully reopened on 22 February 2002. The bridge has not been subject to significant vibration since. In spite of the successful fix of the problem, the affectionate "Wobbly Bridge" epithet remains in common usage among Londoners.[8][9]

An artistic expression of the higher-frequency resonances within the cables of the bridge were explored by Bill Fontana's 'Harmonic Bridge' exhibition at the Tate Modern museum in mid-2006. This used acoustic transducers placed at strategic locations on the cabling of the Millennium Bridge and the signals from those transducers were amplified and dynamically distributed throughout the Turbine Hall of the Tate by a programme which Fontana entered into the sound diffusion engine of the Richmond Sound Design AudioBox.[10]