Middleton-in-Teesdale is a small market town in County Durham. As its name suggests, it stands on the north bank of the River Tees, which separates Durham from Yorkshire, with the villages of Newbiggin upsteam and Eggleston downstream. A few miles to the southeast, downriver, is Barnard Castle.

Teesdale here is deep and delightful, and the town is amongst hills designated the "North Pennines Area of Outstanding Natural Beauty". High Force, one of the grandest waterfalls in the land, is o on the Tees above Middleton.

Middleton is on the Pennine Way about 9 miles below High Force. Dominating the moors to the south side of the village is the Scots-Pine-covered tumulus of Kirkcarrion, one of Teesdale's major Bronze Age burial sites. 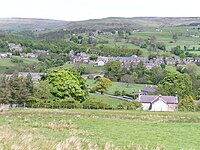 Middleton-in-Teesdale from the south 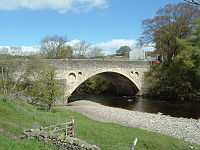 The bridge over the River Tees at Middleton-in-Teesdale

The small market town in Upper Teesdale expanded in the early 19th century when the London Lead Company moved its northern headquarters there from Blanchland in Northumberland. Much of the architecture from its days as a company town is still clearly visible. This includes Middleton House, formerly the headquarters of the company, the school (which is now an outdoor centre) and some company houses. It served as the terminus of a railway line from Barnard Castle until this was closed as part of the Beeching Axe.

Middleton also has links to the early Co-operative Society and may pre-date the Rochdale Pioneers. There are also many early Methodist chapels.

On 20 June 1939, a British American Air Services De Havilland Dragon Rapide (Registration:G-AERE) flying from Heston Aerodrome to Newcastle Airport crashed at Forest-in-Teesdale near Middleton-in-Teesdale. The weather was bad and the aircraft was flying low. The accident killed all three passengers and crew on board.[1]