Melrose is a small town in Roxburghshire, of ancient foundation and now abiding as one of the pretty towns of the River Tweed.

The town's name is recorded in its earliest form as Mailros[1] and around 900 it is named Magilros. Though its early name is known only in Old English, the name is apparently from Old Welsh and means "bare peninsula" or "the bare moor", referring to the original site of the monastery, recorded by the Venerable Bede. The monastery stood in a bend of the river Tweed; in Bede's time it was an important monastery of Northumbria.

In the late Middle Ages, when the monastery had been re-founded in its present position, its name was symbolically represented in the arms granted to it, bearing a mell (a mason's hammer) and a rose. The rose also symbolised the Virgin Mary, to whom all Cistercian abbeys were dedicated. 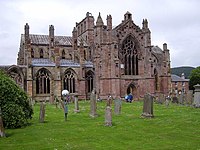 Melrose Abbey was an ancient foundation: Bede wrote of it in the early eighth century and of the Abbot Eata, later Bishop of Lindisfarne, and of St Cuthbert who spend many years there. It stood in a bend in the River Tweed ("almost wholly surrounded by the Tweed") as Bede describes it. This place is now known as Old Melrose, and lies some miles east of the town of today.

The Abbey was re-founded for the Cistercian order by David I in the early 12th century, and the Cistercians moved the Abbey to where the town stands today. It prospered until the Reformation of the Church of Scotland, when it was secularised and ultimately dissolved. It provides one of the most beautiful monastic ruins in Great Britain.

At Melrose Abbey King Alexander II was buried, and later the heart of Scottish king Robert the Bruce. An excavation in the twentieth century found a sealed casket, but it was not opened (it was actually discovered by high school students involved in the dig). The casket was placed in a sealed lead cylinder, and was then re-buried in the abbey back at its proper resting place.

In 1321, the Abbey was destroyed by an English raising party and pilgrims were much besought for money to pay for its restoration: much of what survives today dates from 14th and 15th century reconstruction work.

In 1560 at the Reformation the Abbey was placed under appointed Commendators but the monks were allowed to remain. The community had died out by 1590 and the buildings began to be pulled down for building material. In 1608, King James VI granted the Abbey lands to John Ramsey, Viscount Haddington.

The remains of the Abbey today are cared for by Historic Scotland (open all year with an entrance charge). 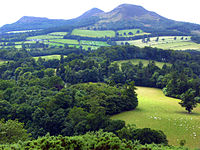 Near Melrose is the Roman fort of Trimontium ("Place of the three hills"). Another set of abbey ruins is found hereabouts too: Dryburgh Abbey, which gives a name to a great country house. 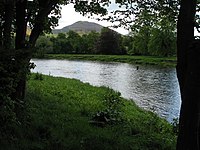 The Tweed near Melrose