Difference between revisions of "M50 motorway (Republic of Ireland)" 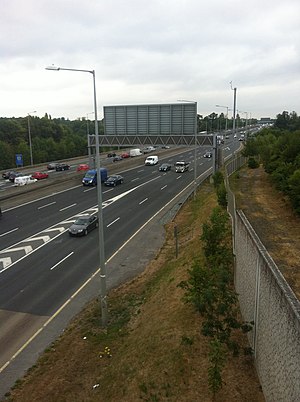 M50 and the West-Link Bridge viewed from Palmerstown 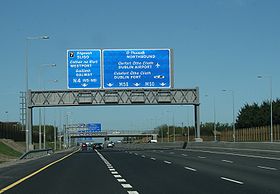 The M50 motorway is a C-shaped orbital motorway in County Dublin, looping around the city of Dulin as an orbital ring-road but also as the major access for port traffic. It is the busiest motorway in Ireland.

The current route was built in various sections over the course of 27 years, from 1983 to 2010. It begins at Dublin Port, running northward through the Dublin Port Tunnel and along a portion of the Airport Motorway. It then turns west at its junction with the M1, circling the northern, western and southern suburbs of Dublin, before merging with the M11 at Shankill in south-eastern Dublin.

A massive upgrade project commenced in early 2006 due to the motorway's chronic capacity problems. Lanes were added J3-J13, and many of the low-capacity roundabout interchanges were replaced with free-flowing interchanges. These upgrades were completed in 2010.

The M50 was originally planned to divert traffic travelling on National Primary Routes away from the city (a full bypass of Dublin). Due to urban expansion and sprawl it now runs through Dublin's suburbs and serves as a route within Dublin, connecting the suburbs.

All of the National Primary Routes radiating from Dublin begin at their junctions with the M50. The junctions were originally in the form of grade-separated signal-controlled roundabout junctions, not free-flowing interchanges. The M50 mainline itself was free-flow through all junctions. The other primary routes served are the N2 to Londonderry/Monaghan, N3 to Navan/Cavan/Northwest, N4/M4 to Galway/Sligo/County Mayo, N7]]/M7 (M8) to Cork/Limerick/Waterford, and the N11/M11 to Wexford. Additional junctions along the motorway serve other suburbs of Dublin such as Ballymun, Blanchardstown, Tallaght, Dundrum, Sandyford and Cherrywood.

Most of these interchanges were subject to high levels of traffic congestion, as was the former toll-plaza north of the West-Link bridge. The busier roundabout junctions were signal-controlled, with tailbacks extending for several miles at rush hour. The most infamous was the Red Cow roundabout junction with the N7, formerly dubbed the "Mad Cow Roundabout".[1] As well as being the junction of two of the busiest roads in the State, the Luas tram Red Line from Tallaght to the city centre used to cross two slip roads at-grade, before continuing city-bound in the median of the R110 (formerly N7). As part of the M50 upgrade works (see below), these at-grade crossings were removed, and on December 2008, the completely reconstructed interchange was open. This greatly reduced the congestion at the once-notorious traffic black-spot.

The roundabout at the N3 is also notable as the Royal Canal and the Dublin-Sligo railway line pass through its centre.

The original speed limit on the M50 was 70 mph (112 km/h). The Southern Cross Route from J12-J13 was given a lower limit of 60 mph (96 km/h), due to its more undulating, twisting route. The route from J3-J13 was changed to 100 km/h after the Republic of Ireland's speed limits became metric in 2005, while the Southeastern Motorway section (J13-J17) became 120 km/h. The Airport Motorway-Port Tunnel section of the route from J1-J3 has a speed limit of 80 km/h due to the closely packed junctions and heavy volume of weaving traffic. Average speed camera technology is in operation in the Port Tunnel section of the M50. 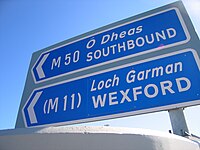 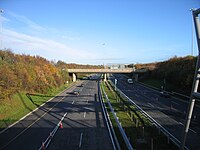 Between J1 and J2

Looking south near J6 at Castleknock during the COVID lockdown

The South Eastern Motorway section, a radial route, was originally meant to be part of the M11. It curves away from the city centre and instead joins the N11 at junction 17 heading south. The next opportunity to exit the motorway at the Bray North exit of the M11.

There is no Junction 8, the junction number having been reserved for a potential extension of the M7 motorway from Lucan/Clondalkin to Naas. This is unlikely to be built given that the N7 Naas Road has been upgraded to dual three lane with at grade junctions converted to grade-separated interchanges or left-in, left-out (LILOs) junctions. 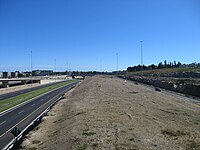 Completion of Dublin's ring road by the building of an Eastern Bypass of the city has been proposed. This plan is controversial, as it would require a tunnel across Sandymount Strand to or possibly through Booterstown marsh bird sanctuary. The project was cancelled in 2009.

Another outer orbital road has been proposed for the Dublin region. It will, if approved, run approximately from Drogheda by way of Navan, Trim and Kilcock towards Naas.