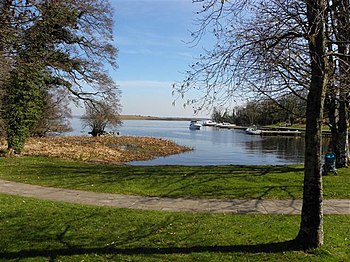 Lusty Beg Island is an island located in Lower Lough Erne, in Fermanagh. Its name is from the old Irish name Lóiste Beag, meaning 'Little lodge'.

In the late 19th century, Richard Allingham, brother of the poet William Allingham, lived on Lusty Beg Island in a thatched cottage known as Ned's cottage which has now been restored and is used as seminar rooms by the Lusty Beg hotel and activity centre.

In the early 20th century, Lady Hunt from Alberta in Canada owned Lustymore Island and Lusty Beg Island. When her residence, Glenvar House, on Lustymore was accidentally burned down, Lady Hunt moved to Germany.

In the 1950s, Captain Kosh, a British Army officer purchased Lusty Beg and constructed the first chalet for hire. In the 1960s the island was sold to Bill and Ann O'Hara who further developed it as a tourist destination. The present owners, Arthur and Liz Cadden, bought the island in 1990.