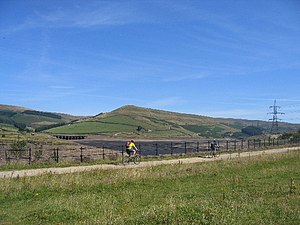 On the Longdendale Trail

The Longdendale Trail is a walking route six and a half miles long in the north of the Peak District, following the former Woodhead railway line through northernmost Derbyshire. It begins in Hadfield in Derbyshire and finishes by the mouth of the disused Woodhead Tunnel.

The railway line ran between Manchester in Lancashire and Sheffield in Yorkshire, up Longdendale, the valley of the River Ethrow, and across the Pennines through the Woodhead Tunnel. The line closed east of Hadfield in 1981. The walking route follows this line up Longdendale on the south side of the dale, the river being the border between Derbyshire to the south and Cheshire to the north. It passes above the shining string of reservoirs which fill the dale, and finishes on the river at the head of the dale, or strictly speaking just north of it by the porrtal to the sealed tunnel.

The path has shallow gradients and a smooth surface that makes it popular with families and cyclists.

The Trail opened in May 1992. It forms part of the longer Trans Pennine Trail, (which is also the National Cycle Route NCR 62) which runs from coast to coast across Great Britain from Southport in Lancashire to Hornsea in Yorkshire.