The London Underground is an urban rail system serving a large part of Middlesex and neighbouring areas of Essex, Surrey, Kent, Hertfordshire and Buckinghamshire in Great Britain. Despite the name, about 55% of the network is above ground.

The system is colloquially known as the Tube. The latter term was originally applied only to the deep-level bored lines, along which run slightly lower, narrower trains along standard-gauge track, to distinguish them from the sub-surface cut and cover lines that were built first, but any such distinction has long been lost and in recent years "The Tube" has been used by London Underground Limited.[1]

When its first section opening in 1863, London's was the first underground railway system in the world.[2] In 1890 it became the first to operate electric trains.[3]

The London Underground Railway is the oldest underground urban railway in the world. In length, at 250 miles it is second only to that of Shanghai.[5]

The tube map, with its schematic non-geographical layout and colour-coded lines, is considered a design classic, and many other transport maps worldwide have been influenced by it.

The map was designed by Harry Beck in 1933. Beck was an electrical engineer who worked for London Underground. When his radical design was accepted he was taken on as London Underground's chief map designing consultant and remained so until his retirement. The original maps were often street maps with the lines superimposed, but as well as being visually complex, this produced problems of space, as central stations were far closer together than outlying ones. Beck proposed the replacement of the geographical layout by a schematic one, comparable to electrical circuitry diagrams. The result is a map characterised by a schematic non-geographical layout and the use of colour coding for lines.

The map is now considered a design classic; virtually every major urban rail system in the world now has a similar map, and many bus companies have also adopted the concept.

There are many references in culture to the map, including parodies of it using different station-names, particularly in London advertisements for unrelated products and services. The intellectual property in the map is however closely guarded by London Underground, who have a particular office which considers any application to reproduce the map in any form and administers copyright licensing fees.

The earlier lines of the present London Underground network were built by various private companies. Apart from the main line railways, they became part of an integrated transport system in 1933 when the London Passenger Transport Board or London Transport was created. The underground network became a single entity in 1985, when the Government created London Underground Limited (LUL).[6] Since 2003 LUL has been a wholly owned subsidiary of Transport for London, a statutory corporation responsible for most aspects of the transport system in the Greater London administrative area.[7]

A deep level line running between Harrow and Wealdstone station and Elephant and Castle. It is named from its original two termini; Baker Street and Waterloo. (map)

A deep level line in central London, emerging at the surface at its eastern and western ends. Its western end has two branches, terminating at West Ruislip and Ealing Broadway respectively, which branches join at North Acton. It passes through the centre of London, running beneath Oxford Street to the City and out into Essex. Its eastern terminus is Epping, though it also contains a wide eastward loop from Woodford. (map)

A subsurface line which until 2010 ran each way in an endless loop with Liverpool Street Station in the east and Notting Hill Gate in the west. It now runs into a spur to Hammersmith before rejoining its original loop. (map)

A subsurface line largely overground, serving the Middlesex and Essex suburbs. It is complicated with several branches. Its eastern terminus is Upminster in Essex, from which it runs cleanly westward through the City and West End beneath the Thames Embankment. In the area of Earls Court one branch heads north to Edgware Road, a spur runs to Kensington Olympia, another branch runs south and crosses beneath the Thames to finish at Wimbledon, while another branch continues westward, emerging into daylight again. This branch splits at Turnham Green, one branch heading south, crossing under the Thames and finishing at Richmond, Surrey, the other going to Ealing Broadway. (map)

A subsurface line without any branches. It runs from Hammersmith eastwards, originally to the City but now extended to Barking, Essex. (map)

A deep level line, first opened for the Queen's Silver Jubilee in 1977, though incorporating track from the original Metropolitan Line. It originally ran to Charing Cross Station, but for the millennium events in 2000 it was extended south and eastwards to serve the "Millennium Dome" in North Woolwich and now runs from Stanmore, through Westminster, under the Thames to Waterloo Station, eastwards and crosses beneath the Thames three more times before heading northwards above ground to Stratford. (map)

A subsurface line serving commuters from Hertfordshire and Buckinghamshire as well as from suburban Middlesex. It is above ground for most of its course, delving beneath only south of Finchley Road. The line was originally the Metropolitan Railway. It runs between Aldgate station at the edge of the City and from Baker Street it heads north-west to Harrow on the Hill, from which it breaks into two branches, one terminating at Uxbridge, the other splitting at Moor Park into Amersham and Watford branches, with a fourth Chesham branch splitting off at Chalfont and Latimer Station in Little Chalfont. (map)

A complex deep level line. Its southern terminus is at Morden in Surrey. North of Kennington it splits into two branches which both head north, through the West end and the City respectively, to rejoin at Camden Town. North of Camden Town the line splits again, one heading to Edgware and the other to High Barnet in Hertfordshire, the latter with a side branch serving only Mill Hill East. (map)

A deep level line emerging into daylight at its northern and western ends. It runs between Cockfosters (at the northern edge of Middlesex) and Acton Town, where it splits to two branches; one heading westward to Heathrow Airport and the other north through the towns of western Middlesex to Uxbridge, accompanying the Metropolitan Line from Rayners Lane. (map)

A deep level line without any branches, running between Brixton and Walthamstow Central. (map)

A deep level line, with just two stations; Waterloo Station (in Surrey) and Bank (in the City of London). It serves commuters arriving at Waterloo for jobs in the City. The line is nicknamed "the Drain". (map)

The East London Line was closed in 2007 and no longer forms part of the Underground. It reopened as part of London Overground system in May 2010.

Design and the arts 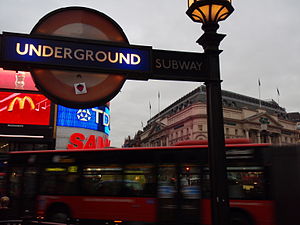 TfL's Tube map and roundel logo are instantly recognisable by any Londoner, almost any Briton, and many people around the world. It has become a major pop culture symbol.

TfL licenses the sale of clothing and other accessories featuring its graphic elements and it takes legal action against unauthorised use of its trademarks and of the Tube map. Nevertheless, unauthorised copies of the logo continue to crop up worldwide. 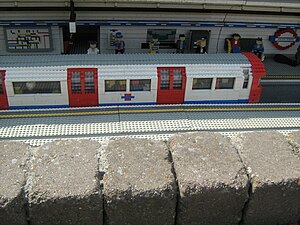 Model of a London underground carriage in Legoland Windsor

The Underground has been featured in many films and television shows, including Sliding Doors, Creep, Tube Tales and Neverwhere. The London Underground Film Office handles over 100 requests a month. The Underground has also featured in music such as The Jam's "Down in the Tube Station at Midnight" and in literature such as the graphic novel V for Vendetta. Popular legends about the Underground being haunted persist to this day.[8]

The announcement "mind the gap", heard when trains stop at certain platforms, has become a well known catchphrase.