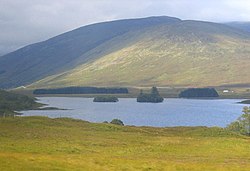 Loch Scaven is a small freshwater loch at the head of Glen Carron near the source of the River Carron, Wester Ross. It is about four miles south-west of Achnasheen and two miles from Loch Gowan. The loch tends in a north-east to south-west direction and its shore is relatively simple. At the west end there is a significant promontory known as 'Cnoc nan Sguad' which projects into the loch on the northern shore. There are two small islands in the centre of the loch opposite Cnoc nan Sguad. The name is an Anglicisation of the Gaelic Loch Sgamhain.

The loch was surveyed on 8 August 1902[1] by R.M. Clark and James Murray and later charted[2] as part of the Sir John Murray and Laurence Pullar's Bathymetrical Survey of Fresh-Water Lochs of Scotland 1897-1909.

This Ross-shire article is a stub: help to improve Wikishire by building it up.
Retrieved from "https://wikishire.co.uk/w/index.php?title=Loch_Scaven&oldid=51897"
Categories: