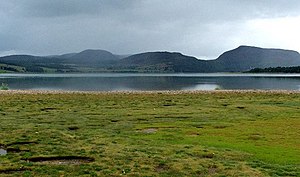 Loch Fleet is a sea loch on the east coast of Sutherland, located between Golspie and Dornoch. It forms the estuary of the River Fleet, a small spate river that rises in the hills east of Lairg.

Loch Fleet was designated a National Nature Reserve in 1998, and is managed by a partnership between Scottish Natural Heritage (SNH), the Scottish Wildlife Trust (SWT) and Sutherland Estates. The NNR extends to 2,614 acres, including the Loch Fleet tidal basin, sand dunes, shingle ridges and the adjacent pine woods, including Balbair Wood and Ferry Wood.

Loch Fleet is a shallow, bar-built estuary with extensive sand-flats and mud-flats backed by saltmarsh and sand dunes.[1] Beneath the sand dunes lies a bedrock of old Red Sandstone, overlain by shingle ridges, which extend from the western NNR boundary to the current coastline and north from Littleferry to Golspie.[2]

On 24 March 1997, the Dornoch Firth and Loch Fleet Special Protection Area was established for wildlife conservation.[1] The SPA covers 19,364 acres of Loch Fleet, the Dornoch Firth, Morrich More, the Mound Alderwoods and Tarbat Ness.[1] The Joint Nature Conservation Committee described it as "one of the best examples in north-west Europe of a large complex estuary which has been relatively unaffected by industrial development".[1]

The total SPA hosts significant populations of the following birds:

Heading inland, the alder woods around the mouth of the river at the Mound are significant.

The ruins of Skelbo Castle are situated on the south side of the loch.

The Battle of Littleferry was fought on the day before the Battle of Culloden in 1746. The Sutherland militia came down from the hills above Golspie and fell upon around 500 men led by the Earl of Cromarty. Cromarty's men were cornered in the Littleferry peninsula on the north-east side of the loch, and were either killed, captured, or drowned in the loch.