Llanerchaeron is a grade I listed mansion beside the River Aeron in Cardiganshire. It was designed and built in 1795[1] by John Nash for Major (later Colonel) William Lewis as a model, self-sufficient farm complex located near Ciliau Aeron, some 2½ miles south-east of Aberaeron.

The name of the house also appears in the 19th century as 'Llanayron', which from the Welsh Llannerch Aeron: many variant spellings of this place name have been used.

There is evidence that the house replaced an earlier mansion. A later owner, William Lewes was the husband of Colonel Lewis's inheriting daughter.[2]

The estate is now in the care of the National Trust.

The neighbouring parish church of St Non—also redesigned by Nash—has registers of baptisms and burials dating from 1730 and marriages from 1754.[3] 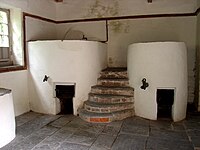 Llanerchaeron has unique historical value in the fact that later owners allowed the farm and household service outbuildings to languish out of use, with no attempt to demolish or renovate them. As a result, we can clearly see exactly where and how essential tasks were performed with considerable attention to quality standards, and often aided by advanced technology, including electricity generated by a water-wheel.

The service facilities include a large laundry and linen-care room, spaces for brewing, butter and cheese making, preparation and salting or smoking of meat and fish, preservation of fruits and vegetables and a full range of crafts. The estate employed carpenters and a full-time stonemason who designed and built whole buildings as well as overseeing the construction of walls, drying platforms and other farm requisites. 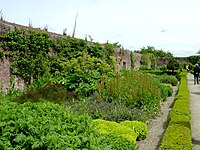 Part of the walled garden

Llanerchaeron's walled gardens are home to dozens of veteran fruit trees, some 200 years old, which are part of the working farm's ongoing organic production. These trees are also important hosts for all kinds of insects, mosses and lichens and, coupled with the traditional vegetable and herbaceous flower beds, they are a significant wildlife habitat.[4]

The estate's former tenant farmland has now mostly been sold but the house and a considerable area of farm, garden and parkland are opened to the public at limited hours for most of the year on Wednesdays through Sundays, and on other days in a late-summer high season.[5] The Dylan Thomas Trail also passes the estate.

The Llanercheron estate hosted some 100,000 visitors to the 2010 youth cultural festival, the Eisteddfod Genedlaethol Urdd Gobaith Cymru, held between 31 May and 5 June 2010. This compared with the normal attendance rate of about 35,000 visitors annually.[6]

Work in preparation for the Eisteddfod was temporarily halted by the discovery of mediæval relics below the ground.[7] This tallied with established knowledge of a large mediæval settlement. (See reference below.) There were also anxieties over the possibility of disturbing the habitat of otters.[8] 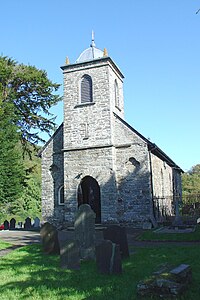 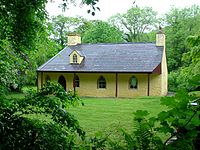 The parish church of Llannerch Aeron dates back to at least 1284 in the reign of Edward I, when there was a large mediæval village in the adjoining parkland which seems to have been deserted around 1500.[1][9] The cost of the church's remodelling (forty pounds) was met by parishioners, underwritten by Major Lewis. There is no documentation to prove the work was designed by John Nash but it was discussed by a minuted public vestry meeting in 1796, within a year of the completion of Llanayron House.[1] Nash is known to have at least aided design of other peripheral buildings, a minister's house and a coachman's house not far from the church. The internal restoration of the church was paid for in 1878 by Mary Ashby Lewis, the daughter-in-law of William Lewis, who was widowed for 62 years and died in 1917 aged 104. When her husband John had been interred in the family vault on 13 July 1855, it was diaried by an Aberaeron chemist that "There were nine other coffins there; some had been there over 100 years".[1] Since the 1920 disestablishment, the church belongs to the Church in Wales.