Llandysul is a village in Cardiganshire. It lies in the valley of the River Teifi and is visited for its fishing and canoeing.

The wider parish includes the villages of Capel Dewi, Horeb, Pont Sian, Pren-gwyn, Tregroes, Rhydowen and the village of Llandysul itself. The 2001 Census recorded this parish with a population of 2,902. 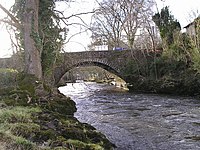 Pencoedfoel is an Iron Age hill fort one mile northeast of Llandysul. An oval banked and ditched enclosure with double ramparts, about 160m by 128m, is defined by degraded banks and scarps on the summit of an isolated hill. Two halves of a bronze collar were found near here, possibly dating to the late 1st century BC or early 1st century AD.[1]

The oldest building in the town is the church which dates from the 13th century. Fairs and markets were established by the Kings of England and the Edwardian marcher lords who captured these lands from the native rulers between the 12th and 14th centuries. Owain Glyndŵr is associated with the town. The men of Llandysul supported him in battle in 1400 and afterwards his lands around Llandysul were confiscated by Henry IV.[2]

In 1644, during the Civil War, the Royalist army was defending Cardiganshire against the Parliamentary army. One of the three arches of the bridge at Llandysul was pulled down by the Royalists to prevent the Parliamentarians crossing into the county.[2] The bridge was later rebuilt with a single arch.

The Teifi Valley around Llandysul was the home of the Welsh woollen industry. Many sheep were reared locally and there were plenty of fast-flowing streams to power machinery so many woollen mills were established in the area in the 19th century. There was also a flannel shirt factory in the town at that time.[2] The mills had nearly all been closed by the end of the 20th century as cheaper textiles became available from the Far East.

The Gomerian Press, Gwasg Gomer in the Welsh language, was founded by John David Lewis (1859–1914). He started by selling books from a corner of his father's grocery store before establishing the press in 1892. It is now a thriving printing company and the largest publishing house in Wales and moved to new premises just outside the town in 2004. It publishes titles for both adults and children, in English and in Welsh. The present managing director, Jonathan Lewis, is the great grandson of the founder.[3]

There is little industry in Llandysul today. The woollen mills are closed and used for other purposes. One houses a confectionery distribution business. There used to be a fortnightly livestock market but it closed in 2008 when the site became part of the new Llandysul bypass. Tourism draws people into West Wales but Llandysul largely misses out from this source of income as it houses no specific tourist attractions.

Llandyssul was a railway station on the Newcastle Emlyn branch, opened in 1864 and closed to passengers in 1952.

The Welsh Harp Centre, Telynau Teifi is a community business, set up with help from the local council in 2004. It is believed to be the only harp-making business now in Wales, a place with a traditional association with the instrument. Folk harps are made here as well as a 20 string lap harp, and the whole manufacturing process takes place on the site.[4]

Llandysul Paddlers Canoe Centre was opened in October 1998. It holds courses and provides accommodation for up to 35 visitors.[5] Canoeing brings in visitors who contribute to the local economy.

The Memorial Park is a recreation area in a loop of the River Teifi. There is a children's playground, a tennis club, a bowling club and sports pitches. Llandysul Cricket Club and Llandysul Football Club play here.

The Tysul Hall was built in 1955 as a memorial to the men lost in two world wars. It can seat 400 people and various events and meetings are held here.

Llandysul has a post office, several banks, two chemists, a range of other shops, a church, several chapels and a leisure centre with swimming pool.

Llandysul Angling Association owns the rights to over 30 miles of fishing on the River Teifi which is a river noted for its salmon, sea trout and trout.

Llandysul Paddlers is a non profit making association which works with young people from the community and across the whole of the UK. They deliver sessions on kayaking, white water rafting and canoeing, away from the water they deliver sessions about climbing and mountain biking and help local schools in there delivery of the Duke of Edinburgh’s Award scheme.

The Powerhouse is a community and arts centre designed to host a variety of activities.[6] It is housed in a historic building beside the River Teifi that originally generated power for the local community. 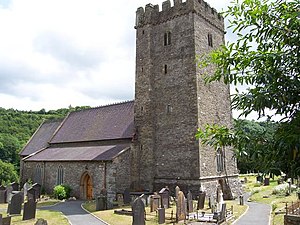 The church of St Tysul was founded by Tysul, 462 - 554, at the meeting place of a number of tracks at a ford over the River Teifi. The present stone structure dates from the thirteenth century and the roof remained thatched until 1783. The ancient altar with its early Christian inscription was incorporated into the altar of the Lady Chapel. The simple nave is separated from the north and south aisles by plain square pillars. Other ancient carved stones are found in the choir vestry. One of these is the Velvor Stone, a fragment cut from the middle of an inscribed slab.[7]

The tower houses a ring of six bells which are rung regularly.

Calan Hen is an interesting custom associated with the church. It dates from 1752 when 11 days were lost on the change from the Julian calendar to the Gregorian calendar. On the old New Year's Day, now 12 January, it was the custom for harvest workers to be given a feast. The rest of the day was spent kicking a ball about. Kickoff was halfway between the two goals, Llanwenog Church porch and Llandysul Church porch. Most of the players were drunk by this time and it was a rough affair. In 1833, the vicar of Llandysul, Reverent Enoch James, substituted a different way of celebrating Calan Hen. It was a gathering in Llandysul Church of the Sunday Schools of the churches within 8 miles of Llandysul to answer catechisms, sing anthems and recite scriptures.[8] The custom continues to this day.