The Library is the permanent home to the Brian Boru harp which is a national symbol of Ireland, a copy of 1916 Proclamation of the Irish Republic, and the Book of Kells. Two of the four volumes of the Book of Kells are on public display, one opened to a major decorated page and the other to a typical page of text. The volumes and pages shown are regularly changed.[2] Members of the University of Dublin also have access to the libraries of Tallaght University Hospital and the Irish School of Ecumenics in Milltown.

The Library proper occupies several buildings, six of which are at the Trinity College campus itself, with another part of the Trinity Centre at St James's Hospital, Dublin:

The oldest library building, now known as the Old Library, is the work of Thomas Burgh (1670–1730). Construction began in 1712. A large building which took twenty years to complete in its original form, it towered over the university and city after its completion in 1732. Even today, surrounded by similarly scaled buildings, it is imposing and dominates the view of the university from Nassau Street. The Book of Kells is located in the Old Library, along with the Book of Durrow, the Book of Howth and other ancient texts. Also incorporating the Long Room, the Old Library is one of Ireland's biggest tourist attractions and holds thousands of rare, and in many cases very early, volumes. In the 18th century, the college received the Brian Boru harp, one of the three surviving mediæval Gaelic harps, and a national symbol of Ireland, which is now housed in the Library. Housed within the Old Library are: 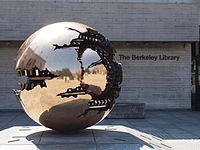 The main library buildings are:

Further materials are held in storage in Stacks, either in closed access within College or at a book depository in the Dublin suburb of Santry.

The Library began with the founding of Trinity College in 1592. In 1661, Henry Jones presented it with the Book of Kells, its most famous manuscript. James Ussher (1625–56), Archbishop of Armagh, whose most important works were "Veterum Epistolarum Hibernicarum Sylloge" (1632) and "Brittanicarum Ecclesiarum Antiquitates" (1639), left his valuable library, comprising several thousand printed books and manuscripts, to the Library. His complete works were published by the Library in twenty-four volumes.[3]

In 1801, the Library was given legal deposit rights, making it the only library in Ireland to have such rights for the United Kingdom at that time.[3]

The United Kingdom's own Legal Deposit Libraries Act 2003 continues a more ancient right dating from 1801, under which the Trinity Collage Library is entitled, along with the British Library, the Bodleian Library at Oxford, Cambridge University Library, the National Library of Wales and the National Library of Scotland, to receive a copy on request of all works published in the United Kingdom.

Many works are now being received electronically rather than in print under new British regulations which came into force in April 2013.[4] 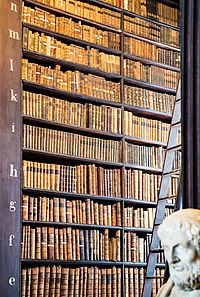 Watercolour of Long Room before the roof was raised

The 213-foot-long main chamber of the Old Library, the Long Room, was built between 1712 and 1732 and houses 200,000 of the Library's oldest books. Initially, The Long Room had a flat ceiling, shelving for books only on the lower level, and an open gallery. By the 1850s the room had to be expanded as the shelves were filled due to the fact that the Library had been given permission to obtain a free copy of every book that had been published in Ireland and Britain. In 1860, The Long Room's roof was raised to accommodate an upper gallery.[5]

The Long Room is lined with marble busts. The marble bust collection was formed when 14 busts from the sculptor Peter Scheemakers were acquired by the college. Many of the busts are of great philosophers, writers, and men who supported the college. The most outstanding bust in the collection is of the writer Jonathan Swift, created by Louis François Roubiliac.[5]

The Long Room also holds one of the last remaining copies of the 1916 Proclamation of the Irish Republic. This proclamation was read by Patrick Pearse near the General Post Office on 24 April 1916. Visitors may also view the Trinity College harp (also known as the "Brian Boru harp") in the Long Room that is the oldest of its kind in Ireland dating back to the 15th century. The harp is made out of oak and willow and includes 29 brass strings.[5]

The Jedi archives of the Jedi Temple in the movie Star Wars: Episode II – Attack of the Clones bear a startling resemblance to the Long Room of the Trinity College Library. This resemblance resulted in controversy as permission had not been sought to use the building's likeness in the film. However, Lucasfilm denied that the Long Room was the basis for the Jedi archives, and officials from Trinity College Library decided not to take any legal action.[6][7]