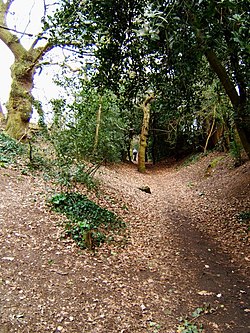 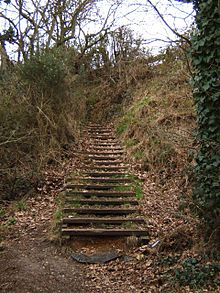 The Lexden Earthworks run by the Colchester suburb of Lexden. They are the remant of the banks and ditches pre-Roman Colchester. The works are of the late Iron Age and protected the western side of Camulodunum.

The most impressive element of the earthworks is Gryme's Dyke, which ran originally from the River Colne to the Roman River and can be traced for most of its length. South of the London Road it appears first as a hedge and then as a well-defined bank with a substantial ditch on its west side.

East of Gryme's Dyke are the remnants of an earlier system known as the Triple Dyke.

There are many pre-Roman graves in the area, including the 'Lexden Tumulus', allegedly by local tradition to be the burial place of the British tribal king Cunobelinus (Shakespeare's Cymbeline).

The Colchester earthworks at Lexden and Bluebottle Grove are among the few surviving late Iron Age defences in Britain. In this pre-Roman period, Colchester, known to the Romans as Camulodunum, was held by the Catuvellauni tribe under King Cunobelin from about AD 10, and before that by the Trinovantes.

The defensive earthworks are thought to have been begun in the last quarter of the 1st century BC, any many pre-Roman graves of the period have been found in the vicinity of Lexden Dyke including the Lexden Tumulus, within the ditch itself.

The Lexden Tumulus is an Iron Age burial mound within the ditch of the Lexden Earthworks, and local legend holds that this is the burial mound of King Cunobelin himself.

Excavations in 1924 did indeed reveal the burial of an Iron Age nobleman in a pit beneath a barrow 100 feet in diameter. He was surrounded by luxurious objects – some of them Roman imports – which clearly belonged to a man of great importance.

The dating of the objects however puts the burial at about 15–10 BC, and the great Cunobelin died in about AD 40, so it seems that he cannot be the man lying here. It may instead be the barrow of Addedomarus, king of the Trinovantes (whose territory bordered that of the Catevellauni), or his son Dubnovellaunus, who succeeded him about 10–5 BC.