The River Soar rises to the east of Hinckley, in the far south of the county, and flows northward through Leicester before emptying into the River Trent at the point where Derbyshire, Leicestershire, and Nottinghamshire meet. A large part of the north-west of the county, around Coalville, forms part of the new National Forest area extending into Derbyshire and Staffordshire. The highest point of the county is Bardon Hill at 912 feet.

Leicestershire is famed as a foxhunting shire but also as an industrial one. Leicestershire is considered to be the birthplace of fox hunting as it is known today and its symbols are found in many local institutions. Leicester, the county town is a historic city with Roman, Anglo-Saxon, Danish and Mediæval roots under a substantial modern city undergoing great social transformation. 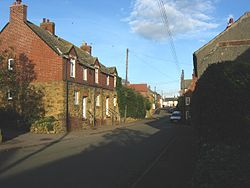 Leicestershire has a wealth of coal seams. Northern Leicestershire is greatly transformed by coal mining. Coalville, north-west of Leicester, was founded on and sustained by the mines, a centre among other mining centres.

Much of the county is famed for its scenery, including the hilly Charnwood Forest, rising above 900 feet and the Wolds in the north-east. In this part of Leicestershire away from the industrial zones are many charming villages and rich farmland. Melton Mowbury, at the heart of fox-hunting country in the east of the shire, is the home of the eponymous pork pie. (Stilton cheese is also from Leicestershire, though named for a village in Huntingdonshire.) Even in Melton though one cannot escape industrial history; the coal canal has been filled in but its gates stick up incongruously in the town's public park. 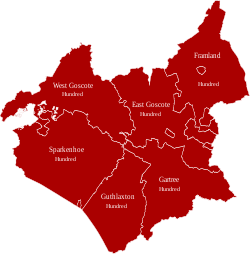 The hundreds of Leicestershire

The shire was formed as such from a pre-existing Danish army-land in the tenth century, though the first surviving written reference to Leicestershire by name in English is in the Anglo-Saxon Chronicle of 1087, as Lægreceastrescir. The Domesday Book of 1086 contains a full record of the manors of the shire in four wapentakes: Framland, Gartree, Goscote and Guthlaxton. The shire now has six hundreds: Framland, Gartree, East Goscote, West Goscote, Guthlaxton and Sparkenhoe.

Leicestershire is considered to be the birthplace of fox hunting as it is known today and the symbol adopted by Leicestershire County Cricket Club, by Leicester City Football Club and by the county council is a fox. Hugo Meynell, who lived in Quorn, is known as the father of fox hunting. Melton Mowbray and Market Harborough have associations with fox hunting, as has neighbouring Rutland. The Melton Mowbray pork pie was devised as huntsman’s lunch.

The coalfields of the shire were developed from the early nineteenth century, and declined in the 1980s.

King Richard III was killed at the battle of Bosworth Field, in west Leicestershire, in 1485. After his remains were discovered by archaeologists in 2012, he was reinterred in Leicester Cathedral in 2015. 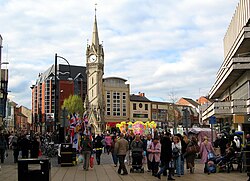 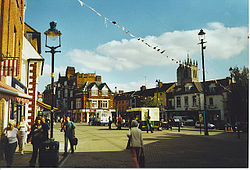 The largest towns of Leicestershire by population are Leicester and Loughborough. Birstall, with a population 11,400 in 2004 and growing claims to be the largest village in the county, or the largest in Britain or even in Europe! The county's main towns and villages are:

Engineering has long been an important part of the economy of Leicestershire. John Taylor Bellfounders continues a history of bellfounding in Loughborough since the 14th century. In 1881 John Taylors cast the largest bell in Britain, "Great Paul", for St Paul's Cathedral in London. Norman & Underwood have been making sand cast sheet lead roofing and stained glass since 1825 working on many of England's major cathedrals and historic buildings, including Salisbury Cathedral, Windsor Castle, Westminster Abbey, Hampton Court Palace, and Chatsworth House.

Snibston Discovery Park is built on one of three coal mines that operated in Coalville from the 1820s until 1986. Abbey Pumping Station houses four enormous steam powered beam engines built in Leicester in the 1890s in the Vulcan factory owned by Josiah Gimson, whose son Ernest Gimson was an influential furniture designer and architect of the English arts and crafts movement.

Many major engineering companies are today based in Leicestershire, from aerospace, automotive, and quarrying to electronics.

Leicestershire has a long history of livestock farming which continues today. Robert Bakewell (farmer) (1725–1795) of Dishley, near Loughborough, was a revolutionary in the field of selective breeding. Bakewell's Leicester Longwool sheep was much prized by farmers across the British Empire and is today a heritage breed admired all over the world. Commercial and rare breeds associated with the descendants of Bakewell's sheep include the English Leicester, Border Leicester, Bluefaced Leicester, Scotch mule, and Welsh halfbred.

The Leicestershire County Show is held on the first Bank Holiday in May each year and includes animal showings, trade exhibitions, and show jumping. Melton Mowbray Market is an important regional livestock market.

Field Sports remain an important part of the rural economy of Leicestershire, with stables, kennels, and gunsmiths based in the county, and the foxhunt kennels awaiting a relaxation of the current ban on the county's great sport.

Stilton cheese, Red Leicester cheese, and the pork pie are three of Leicestershire's most famous contributions to British food.

Leicestershire food producers include Claybrooke mill one of the very few commercially working watermills left in Britain producing a range of over 40 flours, meat from rare and minority breeds from Brockleby's, Christmas turkey and goose from Seldom Seen Farm, and the only manufacturer of Red Leicester cheese based in the county the Leicestershire Handmade Cheese Company.

Various markets are held across the county. Leicester Market is the largest outdoor covered marketplace in Europe and among the products on sale are fruit and vegetables sold by enthusiastic market stallholders who shout out their prices, and fresh fish and meat in the Indoor Market.

The annual East Midlands Food & Drink Festival held in Melton Mowbray had over 200 exhibitors and 20,000 visitors attending in 2007 making it the largest British regional food festival.[1]

Leicester and Leicestershire have had a traditional industry of knitwear, hosiery and footwear[2]. The local manufacturing industry, which began with hand knitting in the Middle Ages, and was fully industrialized by the end of the 19th century, survived until the end of the 20th century through retailers buying UK sourced products, and government measures such as the protection of the Multi Fibre Arrangement which ended in 2004. Cheaper global competition, coupled with the 1999 slump in the British fashion retail sector, led to the end of much of the cheaper clothing manufacturing industry. Today Leicestershire companies focus on high quality clothing and specialty textiles.

Loughborough has a university with a strong emphasis on sport, and the town’s connection to sporting endeavour has attracted a number of British sporting bodies to Loughborough (in particular the SportPark within Loughborough University Campus) or elsewhere in the county. These include: 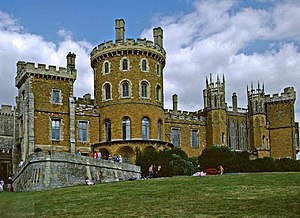 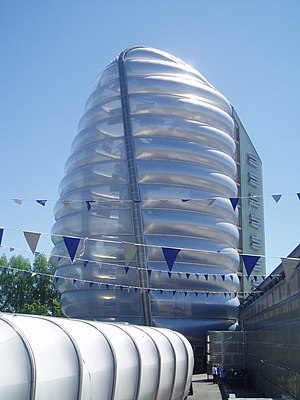 The National Space Centre in Leicester