Leek Wootton is a village in Warwickshire, roughly a mile from Kenilworth and two miles from Warwick. It sits in the triangle created by Kenilworth, Warwick and Leamington Spa, beside to the A46 dual-carriageway trunk road.

The village is of some size, affected by its neighbours, though of under a thousand soul as yet: it is counted within a wider civil parish named 'Leek Wootton and Guy's Cliffe', which includes the hamlets of Hill Wootton, Chesford, Goodrest, North and Middle Woodloes, all together having a population of some 1,100.

The parish church is All Saints, standing in the middle of the village. 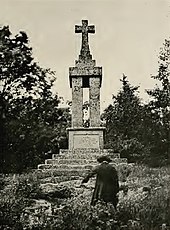 The Gaveston monument on Blacklow Hill

On Blacklow Hill south of Leek Wootton stands a monument named Gaveston's Cross, which marks the point where Piers Gaveston, 1st Earl of Cornwall was murdered. In 1308 Edward II travelled to Boulogne to marry Isabella of France, leaving his hated Gascon favourite, Piers Gaveston, to act as regent. Resentment against Gaveston's position of power grew, and as King Edward refused the demands of his barons to banish Gaveston, they took matters into their own hands. Gaveston was captured in 1312 under the orders of the Earl of Lancaster and his allies. He was captured first by the Earl of Warwick, whom he was seen to have offended, and handed over to two Welsh soldiers who took Gaveston to Blacklow Hill and murdered him; one ran him through the heart with his sword and the other beheaded him. 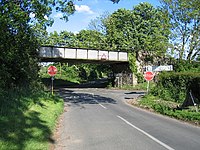 On 11 June 1861, the railway bridge over the road between Leek Wootton and Hill Wootton collapsed in a railway accident: the driver and fireman were killed.

The War Memorial Recreation Ground is to the north-west of the village.

There are numerous public footpaths and walks in the village, including the Tink-a-Tank,[1] several across the golf courses, a woodland walk between the Coventry Road (B4115), which crosses the A46 and comes out at the north end of the village on the Warwick Road, and a small area of woodland to the north west of the village).

To the north of Leek Wootton is the Cattle Brook and just north of Hill Wootton this meets the much larger River Avon, which forms the south-eastern boundary of the Parish.

Woodcote is a 19th-century manor house and estate on the western boundary of the village. During the Second World War it was used as a convalescent home for military personnel, notably American servicemen. It was home to the headquarters of Warwickshire Police from 1949.

The Village Hall stands beside the recreation ground

Every year there is a fair at the village hall.