The County of Lanark is a shire in the heart of the Lowlands. It is Scotland's most populous county, for the City of Glasgow and its eastern suburbs fill its northern parts.

Lanarkshire is in essence the valley of the River Clyde; the Clyde rises in the Lowther Hills and flows south-westward and then north-westward to Glasgow, all in Lanarkshire, after which it leaves the county and widens into the Firth of Clyde.

The county is bounded to the north by Dumbartonshire and Stirlingshire; eastwards by West Lothian, Midlothian and Peeblesshire; in the south by Dumfriesshire; and to the west by Ayrshire, Renfrewshire and Dumbartonshire.

Lanarkshire, with both Glasgow and rich coal mines, was a powerhouse of the Industrial Revolution as much as Lancashire was, and remains an eminent industrial centre even now that the coal has declined.

Glasgow, on the Clyde, is one of Britain's greatest cities, built up by the industrial revolution, transatlantic trade and the shipyards. Glasgow was the main motor of Scotland's swift climb to wealth after the union and even after the shipyards have closed it remains the greatest commercial city of the north and one of the greatest in the whole kingdom.

Lanark, the county town, stands near the Clyde, its textile mills still turning. A mile upstream is New Lanark, the model town built at the opening of the Industrial Age and modelled by Robert Owen, the reformer, for the families of workers at New Lanark Mills.

The industry of Glasgow has historically been coal-mining in the north, and the heavy industry which followed it, and shipbuilding all along the tidal Clyde, from Glasgow (Goyan, Partick and Glasgow harbour) and beyond the county's limits. Textiles dominated at Airdrie, Blantyre, Hamilton, Lanark, New Lanark, Rutherglen and in Glasgow too, and engineering came to Cambuslang, Carluke, Coatbridge, Kinning Park, Motherwell, Wishaw and of course Glasgow. Much has disappeared; the coal mines became depleted or even exhausted and shipyards could not compete with less scrupulous foreign rivals. Nevertheless, the industry of Lanarkshire, one of the hearts of the Industrial Revolution, does continue. 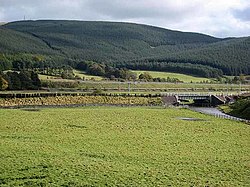 Lanarkshire may be described as embracing the valley of the Clyde, whence its alternative name, Clydesdale. In addition to the gradual descent from the high land in the south, it is also characterized by a gentle slope towards both banks of the river.

The northern end of Lanarkshire is wholly taken up with Glasgow and its suburbs, spreading over the flat land of the lower Clyde.

Away from the heavily urbanised parts in northern Lanarkshire, Upper Clydesdale retains some fine countryside, quiet villages and smaller towns like Biggar.

Further downstream the plain becomes flatter and the larger towns cluster; Glasgow lies not far. In this urbanized, industrialized area the major towns include Coatbridge, Hamilton and Motherwell. Coatbridge in particular is known for its industrial heritage and current industry.

Near New Lanark are the picturesque Clyde Falls; a pair of great waterfalls dropping 250 feet (albeit somewhat diminished in season from a hydro-electric scheme).

The southernmost parts of Lanarkshire are within the mountains of the Southern Uplands. 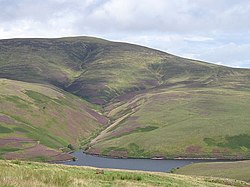 The surface falls gradually from the uplands in the south to the Firth of Clyde. The highest hills are nearly all on or close to the borders of Peeblesshire and Dumfriesshire, and include: 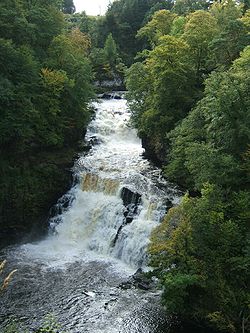 The greatest river of Lanarkshire is the River Clyde, which runs through its heart and whose dale gives the county its shape.

The head waters and affluents of the Clyde supply the county's other main waters:

There are no lakes of considerable size. The few sheets of water in the north Woodend Reservoir, Bishop Loch, Hogganfield Loch, Woodend Loch, Lochend Loch mainly feeding the Monkland and the Forth and Clyde Canals.

The most famous natural features are the Falls of Clyde at Bonnington, Corra, Dundaff and Stonebyres.

The southern upland portion of the county is built up of Silurian and Ordovician rocks; the northern lower-lying tracts are formed of Carboniferous and Old Red Sandstone rocks. Ordovician strata cross the county from south-west to north-east in a belt 5–7 miles broad, which is brought up by a fault against the Old Red and the Silurian on the northern side. This fault runs by Lamington, Roberton and Crawfordjohn.

The Ordovician rocks lie in a synclinal fold with beds of Caradoc age in the centre flanked by graptolitic shales, grits and conglomerates, including among the last-named the local "Haggis-rock"; the well-known lead mines of Leadhills are worked in these formations. Silurian shales and sandstones, &c., extend south of the Ordovician belt to the county boundary. On the northern side of the Ordovician belt two small tracts appear through the Old Red Sandstone on the crests of anticlinal folds. The Old Red Sandstone covers an irregular tract north of the Ordovician belt; a lower division consisting of sandstone, conglomerates and mud-stones is the most extensively developed; above this is found a series of contemporaneous porphyrites and melaphyres, conformable upon the lower division in the west of the county but are not so in the east. An upper series of sandstones and grits is seen for a short distance west of Lamington.

Lanark stands on the Old Red Sandstone and the Falls of Clyde occur in the same rocks.

Economically, the most important geological feature is the coal basin of the Glasgow district. The axis of this basin lies in a north-east to south-west direction and its centre includes Glasgow, Airdrie, Motherwell, Wishaw and Carluke, in which lies the coal.

Evidence of the Ice Age glaciers is abundant in the form of kames and other deposits of gravel, sand and boulder clay. The ice in flowing northward and southward from the higher ground took an easterly direction when it reached the lower ground. In the lower reaches of the Clyde the remains of old beaches at 25, 50 and 100 feet above the present sea-level are to be observed.

The fine agricultural land of Clydesdale is a contrast to the dirty industrial which is dominant. Oats were long the principal crop, along with barley and wheat, potatoes and turnips. In the Lower Ward market-gardening has increased considerably, and the quantity of vegetables, grapes and tomatoes reared under glass has reached great proportions. An ancient industry in the vale of the Clyde for many miles below Lanark is the cultivation of fruit, several of the orchards being said to date from the time of Bede.

The apples and pears are of good repute. There has been a remarkable extension in the culture of strawberries, hundreds of acres being laid down in beds.

The cattle of Lanarkshire are more famed; the favoured breeds being Ayrshire and a cross between this and "improved Lanark".

At an early period Lanarkshire was inhabited by a tribe known as the Damnonii, who may or may not have been the same tribe as the Dumnonii or Damnonii who inhabited Devon and Cornwall. The Damnonii of the Clyde had their territory divided by the Antonine Wall cast up between the Forth and Clyde (remains of which are found in the parish of Cadder), but they were never wholly subjugated by the Romans. Traces of their fortifications, mounds and circles exist, while stone axes, bronze Celts, querns and urns belonging to their age are occasionally unearthed. They were reputed amongst the Romans to be a tribe of the most barbarous practices, and in The Decline and Fall or the Roman Empire Gibbon (who wrote during the Enlightenment) commented:

The Romans did march up Clydesdale, and built the Antonine Wall to encompass it all in the Empire. There are traces in the camp on Beattock Summit near Elvanfoot, in the fine bridge over the Mouse near Lanark, in the road to the south of Strathaven, in the wall itself and in the coins and other relics that have been dug up.

After the Romans retreated, Clydesdale formed part of the kingdom of Strathclyde. In the 7th century, this was subdued by the Northumbrians but it lived on. King Owen was slain at the cataclysmic Battle of Brunanburh and soon after in 945 the kingdom was conquered by Edmund, King of the English and ceded to King Malcolm of Scotland.[1] 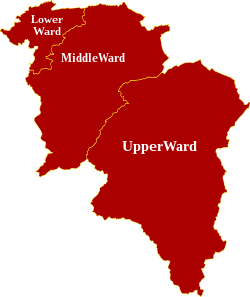 The Wards of Lanarkshire

The early county embraced for a time a portion of Renfrewshire, but this was disjoined in the time of Robert III. The shire was then divided into two wards, the Over (with Lanark as its chief town) and the Nether (with Rutherglen as its capital). Later, the division was made into three wards, Lower, Middle and Upper, which persist to the present day.

Independently of Glasgow, Lanarkshire seems not to have borne any great part in general history until the Industrial Revolution, but has been the scene of several exciting episodes.

Many of Wallace's daring deeds were performed in the county. Mary Queen of Scots met her fate at Langside in 1568. The Covenanters received constant succour from the people of Lanarkshire, defeating Claverhouse at Drumclog in 1679, but suffered defeat at Bothwell Brig in 1679. 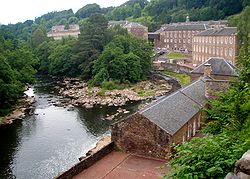 The Union in 1707 woke Glasgow: within weeks the first ships set sail for the North American colonies and soon Glasgow was booming. The new, wealthy merchants built their mansions in the city and in time the city was utterly transformed.

In 1786, David Dale built his mills on the Clyde, creating New Lanark, and laid the foundation for the Industrial Revolution in the county, and indeed was one of the first flowerings of Industry anywhere. His son-in-law, Robert Owen, built the town to a new pattern based on his social ideas.

The opening of the nineteenth century saw the coal measures of northern Lanarkshire opened up and the Industrial Revolution was well and truly underway; trade in Glasgow docks was joined by shipbuilding and heavy industry. 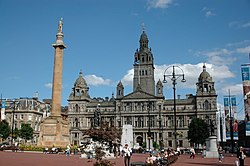 *: Consists of the ancient parishes of Calton; Maryhill; Shettleston; and Springburn; as well as Glasgow City; and Barony.
†: Extends into Renfrewshire
Additionally the parish of Cathcart otherwise in Renfrewshire and those of Moffat and Kirkpatrick Juxta otherwise in Dumfriesshire extend into Lanarkshire. 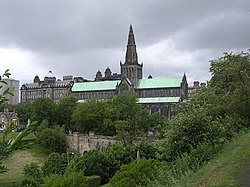