Lamb Holm is a small, uninhabited island in Orkney. Though a tiny place, the highly ornate Italian Chapel on the island is an attraction which brings many visitors. 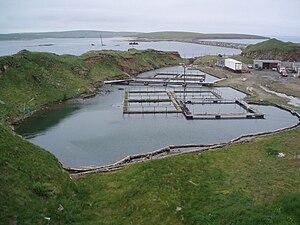 The flooded quarry on Lamb Holm, used for the Churchill Barriers, with Barrier no. 2 behind

Lamb Holm lies in Holm Sound, one of the eastern entrances to Scapa Flow, between Mainland and the island of Burray,[1] It is just 99 acres.

The Churchill Barriers carry the road from South Ronaldsay to Mainland, Orkney. Lamb Holm is connected to Glims Holm to the southwest by Barrier Number 2, and to Mainland by Barrier number 1.

The quarry used to build the Churchill Barriers has now been flooded and converted into a fish farm.

In 1942, more than 1,300 Italian prisoners of war were captured in North Africa and taken to Orkney, where they remained until early 1945. Of these, 550 were taken to Camp 60, where they were put to work building the Churchill Barriers, four causeways created to block access to Scapa Flow.

In 1943, Major T P Buckland, the Camp 60's new commandant, and Father Giacombazzi, the Camp's priest agreed that a place of worship was required. Two Nissen huts were joined together to form a makeshift chapel. The prisoners, under the leadership of prisoner Domenico Chiocchetti, did all of the work to transform a simple corrugated iron structure into a work of beauty. The chapel was lined with plasterwork and an altar was made out of concrete. Chiocchetti painted the sanctuary end of the chapel. The beauty that he created led to the prisoners decorating the entire interior and creating a front facade out of concrete that concealed the shape of the hut and made the building look like a church.

Since the prisoners' departure, several residents of Camp 60, including Chiocchetti, have made return visits to the chapel they created. In 1996 a declaration was jointly signed by officials in Orkney and Chiocchetti's hometown of Moena, reinforcing the ties between the two places. The building has been lovingly preserved and is still used as a chapel.