Difference between revisions of "Kyle" 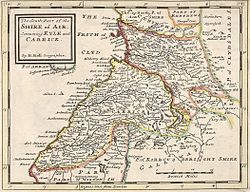 Kyle is the middle part of Ayrshire; one of the three traditional divisions of the county, with Cunninghame to the north and Carrick to the south. To the west it bounded by the Firth of Clyde and to the east by Lanarkshire. It had a population recorded at 154,329 in the 2011 census.

Ayrshire is divided naturally by its three primary rivers all running in a generally westward direction to flow into the firth of Clyde:

Additionally, Kyle itself is divided in two by the River Ayr:

The county town, Ayr, is in Kyle. 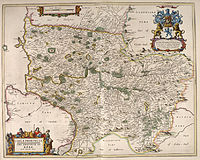 Local legend tells that Kyle is named after Coel Hen ("Old King Cole"), a King of the Britons, who was reputedly killed in battle in this area and is said to be buried in a cairn near Mauchline.

Whatever its origin, the district long predates Ayrshire. It appears in the anonymous Continuation of Bede's Ecclesiastical History by the name Cyil, in which it is stated that "In the year 750, Cuthred, king of the West Saxons, rose up against king Ethelbald and Oengus; Theudor and Eanred died; Eadbert added the plain of Kyle and other places to his dominions".

Near Cumnock, at the confluence of Guelt and Glenmuir Waters, lie the ruins of the 15th-century Kyle Castle.