Kirkcaldy is a town on the coast of Fife, on a shallow bay on the northern shore of the Firth of Forth. It is the largest town between the cities of Dundee and Edinburgh. It also forms a parish by the name of Kirkcaldy and Dysart.

Kirkcaldy has an enterprising and industrial heritage and has been the home of man famous men, greatest of whom was Adam Smith (1723–90) "the father of modern economics".

The name of the town is believed to have derived from the Pictish language, from the words Caer Caled, which may translate as "place of the hard fort" or "place of Caled's fort".

Kirkcaldy has long been nicknamed the Lang Toun in reference to the 0.9 mile main street of the early town, depicted so on maps as early as the 16th and 17th centuries. The street would eventually reach a length of four miles.

According to an estimate taken in 2006, Kirkcaldy has a population of 48,630, making the town the largest settlement in Fife.

Kirkcaldy is a busy town which serves as a centre for the surrounding towns and villages. It has four large public parks (Beveridge, Dunnikier, Ravenscraig and Gallatown), and major shopping facilities in the town centre and in Sinclairtown.

The town also hosts the annual Links Market commonly known as Europe's longest street fair.[1][2] The Kirkcaldy Museum and Art Gallery is in the middle of town.

Employment is now focused in the service sector, with the largest employer being the MGT call centre. Kirkcaldy's industrial heritage of linoleum production still continues to this day, if not on as big a scale as in former days, and the company has diversified into the production of PVC floor tiles and speciality marmoleum.[3][4]

The Adam Smith College also has a presence in the town with three campuses (St Brycedale, Priory and Mitchleson).

Kirkcaldy is located on a bay facing southeast onto the Firth of Forth, along a sandy cove.[5]

The town is triangular in shape with relatively low-lying ground being a feature to the south-west near Invertiel and to the east of Boreland. The farmland land hereabouts is arable, growing cereals, potatoes, field beans, other vegetables. 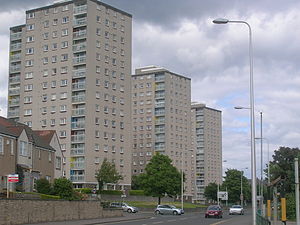 Kirkcaldy developed as a linear settlement stretching along the sandy cove between the Tiel Burn in the south and the East Burn to the north. More recently as the town has developed north the settlement shape is more triangular in form.[5][6]

The first development plan in the town, after the Second World War was to focus towards new private sector housing to the north and west, land suited to new building since there were no man-made or natural barriers in the way. Older areas in the town such as Gallatown, Sinclairtown, Pathhead and Linktown would also be subsequently redeveloped. The construction of the first multi-storey flats in the town began with Viewforth (built in 1958) to the south-west of the town and Ravenscraig (1963–1964) to the east of the town.[7]

A local plan replaced the first development plan in the early 1980s. New housing developments looked toward the south-west and north-west of the town, road were upgraded and the Thornton by-pass built, joining the town to the mortorway network.

Towards the end of the 11th century, King Malcolm III bought the land around the modern town to grant as a gift to the monks of Dunfermline Abbey to serve as an endowment for the building of their new church. A linear settlement began to form around a harbour on the East Burn.

Early industries which soon prospered in the town included the production of textiles, nailmaking and salt panning. The passing of feu-ferme status in the middle of the 15th century meant the town became semi-independent from the monks of Dunfermline Abbey. Full independence was achieved by a charter for royal burgh status granted by King Charles II in 1644.

Kirkcaldy harbour was acknowledged for having "a sheltered cove round the East Burn", which gave easy access for boats.[3] The success led to the growth of the burgh, surrounding the harbour, Main Street and Tiel (West) Burn.[8] The town eventually became known as the "lang toun" in reference to the near mile-long main street which would later extend to four miles.[3][9]

In 1304 the abbot of Dunfermline requested permission from King Edward I of England to hold a weekly market and annual fair (the latter is the basis of the modern Links Market) in this "most ancient of burghs".[10][11] Kirkcaldy was granted "burgh of barony" status at some time between 1315 and 1328 by Robert The Bruce.[12]

In 1451, the town was awarded feu-ferme status gaining semi-independence from Dunfermline Abbey. A charter issued by Charles II granted royal burgh status in 1644. The King left 9 acres of common moor to the town suitable "for dying and bleaching of linen, drying of clothes, recreation and perpetuity".[13] 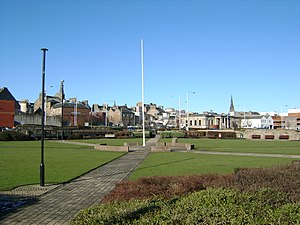 Remains of the common moor now known as Volunteers' Green

As Kirkcaldy entered into the 19th century, the arrival of the railway helped the town develop into the industrial heart of Fife.[14][15] Due to the increased trade in the harbour, a new wet dock and pier were built from 1843–1846 and this was followed by an inner dock between 1906–1908 for the growth in the linoleum and coal trades.[3][14][16] Kirkcaldy became a centre for iron founding and linen manufacturing—specialising in coarser material (i.e. sailcloth).[17][18] Linoleum was first introduced by the Scottish Linoleum Company (later Barry, Ostlere and Shepherd), due to the expired patent of Frederick Walton in 1877.[19] Although the Michael Nairn & Co Ltd have since become famous, for their trade mark and being the world producers of the cloth.[3][20] The linoleum also made Kirkcaldy recognisable from "the queer-like smell"[8] resulting from the odour of the principal ingredient, linseed oil.[8] Other industries such as coal, pottery, flour, malt, printing, light electrical engineering and furniture manufacturing flourished.[20][21]

During the late 19th century, the town became a prosperous centre of linoleum. Originally developed in the town as floorcloth, this was quickly dominated by the Michael Nairn & Co but did not become popular across a worldwide scale until the beginning of the 20th century. Other industries such as coal, flour, malt, printing, light electrical engineering and furniture manufacturing rose in prominence. After the Second World War, a plan saw new housing estates being built to the north-west of the town along with multi-storey flats and the redevelopment of older areas such as Gallatown, Sinclairtown and Pathhead. The population of the town was expected to reach between 55,000 and 70,000, but this was shattered when the production of linoleum declined in the middle of the 1960s. 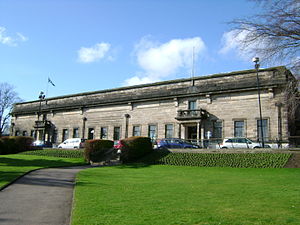 Considered by many to be one of Scotland's finest museums, the Kirkcaldy Museum and Art Gallery was donated in 1925 (by Nairn's benefactor, John Nairn the grandson of Michael Nairn), contains a notable collection of paintings by the Scottish Colourists and a permanent display of the town's industrial heritage.[24][25] The nearby Adam Smith Theatre on Bennochy Road which opened in 1899 by Andrew Carnegie, was also given to the town by linen manufacturer and town provost, Michael Beveridge to preserve the legacy of Adam Smith on the 100th anniversary of his death.[26][27][28] The theatre is the home of the annual Fife Festival of Music and Fife Opera, as well as Kirkcaldy Amateur Dramatic Society, Kirkcaldy Amateur Operatic Society, and the Kirkcaldy Gilbert and Sullivan Society.[29][30]

The famous Links Market sited on the Promenade every year, widely claimed to be "Europe's longest street fair" began as a farmers' market in 1304 before moving to Sands Road (later to be known as the Promenade) in 1903.[31] The 700th anniversary of the market was celebrated in 2004.[31]

Another tradition of the town is the Kirkcaldy pageant, which began in 1923 to raise money for several hospitals in the area (later local charities) with the help and support of local firms.[7]

Famous sons and daughters of Kirkcaldy

The six most famed men of Kirkcaldy are:

These names have all been acknowledged in Kirkcaldy's Town House, all for the exception of Robert Philip, who is commemorated weel enough in his gifts to the town.[32][33] The hall now commemorates two furhterm names; the poet, diarist and author, Marjorie "Pet Majorie" Fleming (1803–11) and floorcloth and linoleum manufacturer, Michael Nairn (1804–58).[34]

Other names associated with or hailing from the town include the former Prime Minister Gordon Brown; the author John Buchan; architect William Adam; artist Jack Vettriano; writers Ian Rankin and Val McDermid and professors Duncan Glen, William Walker, Henry Moyes and Tom Hubbard. In politics, the town boasts Governor-General of Australia, Ronald Munro-Ferguson; David Steel the final leader of the Liberal Party and the first female judge of the Supreme Court of Canada and Court of Appeal for Ontario, Bertha Wilson. 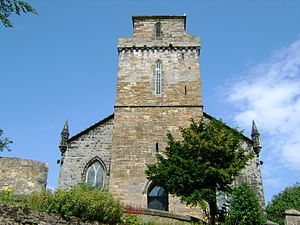 The town centre of Kirkcaldy is a conservation area.[35] 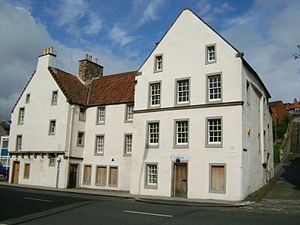 To the north-east of the town are two important buildings associated with or at one stage the homes of wealthy merchants and shipowners connected with Kirkcaldy's harbour.[43][44] The Merchant's House located at 339–343 High Street, built by the Law family around 1590, is considered to be one of Scotland's finest 16th century town houses and it has been stated by Scottish Heritage Trust that this may "be the most important town house outside the cities".[44][45] The decor and quality of the building has been claimed to be similar to that of Culross Palace in Culross and Gladstone's Land in Edinburgh.[45] The A-listed Sailors' Walk located at 443–449 High Street, were initially a pair of two Flemish style 17th century dwellings.[46] In 1650, Charles II stayed at the house as a lodger, when on a tour of Scotland, after being crowned King at Scone Palace.[8] Mary, Queen of Scots, has been rumoured to be have been a regular visitor to the house, on her frequent journeys to Falkland Palace.[46] The house was nearly demolished in 1934, but was saved by a forward-looking committee and was acquired in 1935 by the National Trust for Scotland.[46] Later, Wheeler and Sporson undertook reconstruction work on the building between 1954 and 1959.[46] 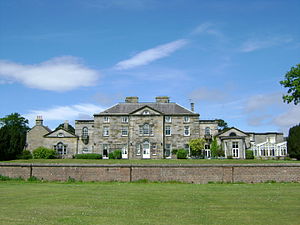 North of the harbour area on the Path are two excellent examples of distinctive architectural styles.[45] The impressive B-listed Hutchison's House was designed by George Spears, the owner of the nearby East Bridge distillery, in 1793. Displaying an ellipticed fanlight and doric-columned Venetian windows, these are evidence of his wealth.[45][47] At the top of the Path, is the A-listed Path House (initially known as Dunnikier House) a three-storey L-plan tower house designed by John Watson of Burntisland in 1692.[45][47][48] The house became a residence for the Oswald family – specifically Captain James Oswald – when Watson sold the property in 1705 citing financial difficulties.[49] In 1979, the house was given an amenity award by the Kirkcaldy Civic Society. Today, the house is used as a doctor's surgery.[48] 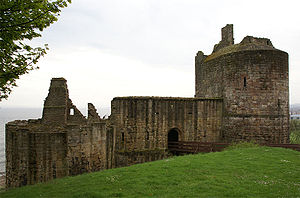