Kirkburton is a village and parish in the West Riding of Yorkshire, five miles south-east of Huddersfield. The ancient parish comprehends eight townships, of which the Kirkburton township comprises the villages of Kirkburton and Highburton and several hamlets, including Thunderbridge, Thorncliffe, Storthes Hall, Burton Royd, Riley, Dogley, Common Side, Causeway Foot, Lane Head and Linfit. According to the 2011 census the civil parish had a population of 26,440,[1] while the village itself had a population of 4,299.[2]

The area was populated in the Iron Age when a settlement was believed to have been built on the site of the church. A Saxon fort is also believed to have stood on that site. The village is recorded in the Domesday Book as Bertone in Wachefeld. The entry reads (translated):

"In Wakefield, with 9 Berewicks... are 60 carucates of land 3 bovates and the third part of 1 bovate to the geld. 30 ploughs could plough this land. This manor was in the demesne of King Edward; now, in the king's hand, there are 4 villans, and 3 priests and 2 churches, and 7 sokemen and 16 bordars. Together, they have 7 ploughs. [There is] woodland pasture 6 leagues long and 4 leagues broad. The whole [is] 6 leagues long and 6 leagues broad... To this manor belongs the soke of these lands... Kirkburton, 3 carucates... in all, there are 30 carucates to the geld, which 20 ploughs could plough. Now they are waste"[3] 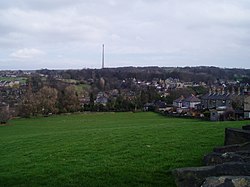 Kirkburton: Looking east from Riley towards Low Town and Turnshaws

After the Norman Conquest the village grew from the waste recorded in 1086. Kirkburton was named after the church was built in 1190 and Highburton was built on the hill. In the Middle Ages the township was part of the Manor of Wakefield and Kirkburton church was at the head of a 16,000-acre parish, that extended to the Holme Valley.

During the Civil War the villagers supported the Parliamentary cause. The priest, Gamaliel Whitaker, angered his parishioners by supporting the Royalists. He was denounced to the government forces who went to arrest him in 1644. During the struggle the soldiers shot his wife, Hester, in the ensuing confusion. Legend has it that her ghost haunts the old vicarage. 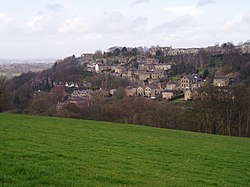 Kirkburton: Looking north from Riley towards Burton Dean and Highburton

The population of the township increased with the growth of the textile trades. By 1800 the population was about 1,400: 60 years later it was approaching 3,700. After this, there was a general decline and for nearly a century the figure was around 3,000. In 1971 there were 2,800 inhabitants, but following housing developments at Highburton the population is nearer 5,000.

The Huddersfield-Kirkburton Branch Line opened in 1867, serving two terminal railway stations as well as Deighton, Kirkheaton, Fenay Bridge and Lepton. It was unusual in that it was operated by the London and North Western Railway company in an area where the Lancashire and Yorkshire Railway company had a virtual monopoly. Plans to extend the line to Barnsley never materialised and Kirkburton remained at the end of the line which was primarily used for goods traffic, although passenger services ran until 1930. The line continued as a transport goods until the 1960s, when a combination of road haulage and a decline in industry lead to closure of the railway station in 1965. Evidence of the railway remains in the area around Northwood Park, a housing development built on the old route. Parts of the railway station still remain, albeit in ruined state, whilst the bricked up tunnel can be seen when travelling into the village centre from the Penistone Road.

Kirkburton's major industries were the woolen industry and coal. The village has a small shopping centre in Kirkburton but Highburton has become the residential centre.

The manufacture of woollen cloth was well established here by the time of Queen Elizabeth I. It expanded rapidly after the late 18th century. The first textile mill was built at Dogley in about 1787 and used waterpower to prepare wool for spinning and for fulling the finished cloth. In about 1800 another mill opened at Linfit, which used steam power. Both mills gradually took on other processes and developed into substantial businesses under the Kenyon and Hey families. By 1880 there were eight mills at work in the township.

Leather tanning and the exploitation of coal seams made valuable contributions to the economy of Kirkburton for several centuries. The last tannery closed in the 1830s. Coal mining grew in importance with the increased use of steam for pumping water and by 1850 there were 20 small pits in the township. The remains of a number of mines and bell pits can be seen, including the former St Helen's Colliery on Moor Lane in Highburton. In the latter half of the 19th century there were more than 30 pits operating around Kirkburton employing more than 300 men. The last colliery closed about 70 years ago. One old-established industry, which has moved from the village, was the manufacture of edge tools and shovels, which was introduced in the mid-18th century. The last factory, Carter's, moved to new premises a few years ago.

In 2006 Shepley Spring Ltd acquired the former Whitley Willows Textile site in Kirkburton and set up a volume bottled water plant, utilising the vast high quality ground water sources in this area. Known as Shepley Spring Brookfield, the site operates 24 hours a day and produces tens of millions of bottles for UK supermarkets and wholesalers.

Kirkburton Cricket Club was founded at the Rose and Crown Inn on 25 February 1860. The public house, at the bottom of Slant Gate, is now a private residence. The club played at Turnshaw's before moving to Riley in 1878. The club was a founding member of the Huddersfield and District Alliance in 1893. Former England cricketer Phil Defreitas played for the club in 1995. 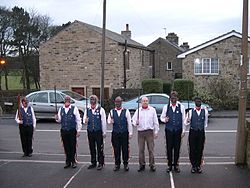 Kirkburton is the home to Kirkburton First School and Kirkburton Middle School. The Adult Education Centre and Special School on Turnshaw Avenue closed in 2006. The village has a partially manned police station, masonic hall, six public houses, purpose-built health centre (opened October 2005) and dental surgery. The largest housing areas can be found in the areas occupying Riley, Low Town, Brickfields and Turnshaws. North Road and George Street form the main road through the village and houses the majority of shops and businesses.

Kirkburton and Highburton have a thriving community association that meet at the Burton Village Hall, the former Highburton First School, Northfield Lane, Highburton.

Kirkburton has a rapier dance team, who perform traditional longsword dances each New Year's Day at pubs in the villages of Kirkburton and Highburton in addition to their numerous appearances at festivals elsewhere in the country. Rapier dancing was a tradition in the village up to the beginning of the 20th century, and was revived in 1974. The team adhere to what is largely believed to be the original dress of clogs, blue waistcoats and trousers with ribbons down the side. The final tradition, that of blackened faces, is only adopted during the New Year performances. 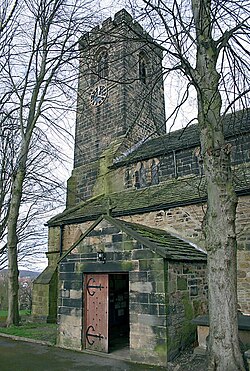 Kirkburton Church is dedicated to All Hallows. It was built in 1190, and is a Grade-I listed building. Most of the structure is 13th-century although parts have been rebuilt. The tower was added in the 15th century. Inside the church is a late-mediæval nave ceiling, large wooden pulpit, stone font and Elizabethan and Jacobean pews. A small window in the chancel may have opened from the cell of a hermit. A restored 10th century stone crucifix can be found inside, supporting the belief that another church or Christian settlement may have existed on this site. The church has undergone extensive restoration. The churchyard has also undergone landscaping and is a designated wildlife sanctuary as well as its own website kirkburtonchurchyard.co.uk which contains the records of inscribed gravestone and memorials.[4]

The Methodist Chapel was built at Ponty in 1816 but moved to North Road in 1845 on the hill just off the main road that runs behind the old library. The chapel closed in 1987 and is now a private residence.

The Primitive Methodist Chapel was built at the top of Slant Gate, Highburton in 1832. A school, now demolished, was built in 1899 and the chapel was enlarged in 1926. Like the Methodist chapel in Kirkburton it closed, this time in 1973, and is now a private house. 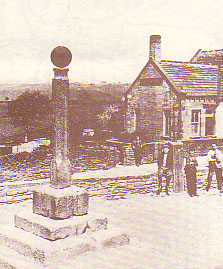 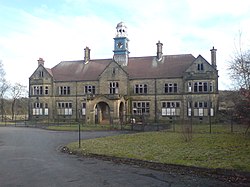