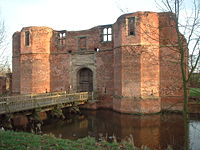 The gatehouse, as viewed from the front of the castle

The castle was begun in 1480 by William Hastings, 1st Baron Hastings, during the period of the Wars of the Roses. He already owned a manor house on the site (some of the original manor house foundations are visible as ruins within the enclosure of the castle), for which he planned to totally redevelop. His ambition was to create a fortified residence on a rectangular plan enclosed by walls, towers and a moat.[1]

However work stopped at the castle when he was executed in 1483 for treason by Richard III and it was never completed.[2] Parts of the castle were occupied by the remaining Hastings family members, but by the 16th century the site had been left to ruin.[1]

The manor house on the site dates back to the 13th Century, and was once the home of the Pakeman family. Sir Simon Pakeman was the Lord of the Manor and a knight of the Shire at Parliament.[3] The castle changed hands in 1364 when Robert de Herle, dying without an heir, left his land to his sister Margaret's son, Ralph Hastings of Wistow. Ralph's father was Sir Ralph Hastings of Wistow, who had married Margaret Herle, daughter of the then Lord of the Manor some years earlier.[4]

Ralph Hastings is noted in the Duchy of Lancaster records as one of John of Gaunt's most trusted commanders in the field. He had three sons. The eldest son, another Ralph, became heir to the manor upon his father's death in 1398, but was implicated in the Scrope Rebellion and was executed. The middle son, Richard, then held the manor at Kirby until his death in 1436. The youngest brother, Leonard Hastings, then held the manor. He was appointed a sheriff for the counties of Leicester and Warwick in 1453, and fathered a son William Hastings in 1431.[4]

Through his father's affairs in Leicester, William had gained a close friendship with Edward, the future King Edward IV. It was William Hastings who then inherited his father's estates upon his death in 1455, and as soon as Edward attained the throne in 1461, William received the title of Baron Hastings and became the holder of many awards and honours. In 1474 William obtained a licence from the King to enclose 3,000 acres near Ashby de la Zouch, 2,000 acres near Bagworth and 2,000 acres near Kirby. He had ceased to be a tenant at Kirby by acquiring the manorial rights from the Villiers family a few months before his inclosure schemes were licensed. He then also applied for a license to crenallate the house of the Manor, which would permit him to fulfil his plans to fortify his planned residence.[4] Work then started on the castle in 1480.

Although records survive from the Middle Ages documenting the costs and expenditure related to castle building, they are predominantly royal records. It is not until the late Middle Ages that substantial records relating to the nobility building castles survive; Kirby Muxloe is one such case.[5] It is recorded that the master mason for the castle was John Cowper, who was paid the sum of eight pence a day to oversee the stonework, as compared to the brick-maker in charge, Anthony Docheman, who was paid ten pence a week.[4]

In 1483, Edward IV died, the boy King Edward V was soon deposed and murdered and Richard of Gloucester usurped the throne. On 13 June 1483 during a council meeting at the Tower of London, the new king, supported by the Duke of Buckingham, accused Hastings and other council members, of having conspired against his life. Hastings was immediately beheaded in the courtyard. Work on the castle at Kirby Muxloe was promptly stopped, and it was never completed,[2] however parts of the castle were sufficiently finished to be occupied by the remaining Hastings family members, but by the 16th century the site had been left to ruin.[1]

The castle was sold by the Hastings family in 1630, and the site was then occupied by a farm; but in 1911 the Ministry of Works took over the site and undertook repairs.[1]

The castle is now in the guardianship of English Heritage. It has recently undergone extensive restoration work. It is open to visitors on Saturdays, Sundays and Bank Holidays from 1 May until 31 August.[1]

The castle is built predominantly in brick, which was a new, expensive, and fashionable material at that time. Such lavish construction was in part afforded by the immense power and wealth that William had gained in the service of King Edward IV. The red bricks were formed and fired in a kiln either on, or nearby the site. The castle also featured a new type of defensive detail for the period: gun ports for artillery emplacements.[1]

The surviving buildings consist of the Gatehouse and the west Tower. The gatehouse is partly complete to the first storey, and has black brick patterned into the red brick. The initials "W.H." are visible above the gateway along with the arms of Hastings, a ship, and the lower half of a possible figure.[3] The plan of the gatehouse has octagonal turrets. There are two rooms at ground floor either side of the entrance with vaulted brick ceilings. These were to serve as the porters lodge and the guardroom, they had windows to the court and housed large fireplaces. The Porters Lodge is used today as a visitors reception. There are also spiral staircases to the first floor level, which was never completed and is unroofed, but and would have been where the drawbridge and portcullis were worked. It is probable that a further story was planned for the Gatehouse.[1] Within the octagonal towers facing the moat there are circular gun-ports, with sighting slits above, for canon artillery. Two of these are located beneath the water level of the moat, which would appear to be ineffectual unless the moat was dry. The gun-ports therefore appear to be more for show than for actual use of defence.[3]

The West Wing was the only part of the castle to be fully completed, and comprises three storeys of accommodation rooms, each room having a lavatory. Today the interior of the Wing is un-floored, but a spiral staircase affords access to ante-chambers up to the second storey.

The prospective hall and the north wing were to contain the main living rooms, retained from the old house. Footings of the outlines for the pantry, buttery and passage leading to it are visible, although the kitchen and the rest of the original manor house remain hidden beneath the current ground level.[3]

The moats are 60 feet wide and are spanned by a timber drawbridge allowing access to the gatehouse.[3] The supply of water to the moat is via a small brook. Two dams were constructed, the first is used to divert the water to the main stream, and the second controls the water level in the moat. It incorporates a sluice which allows the moat to be emptied when opened. To plug the shaft of the sluice, a tapered piece of wood covered with leather was used, remains of which were found when the moat was cleared during restoration.[3]

Wide view of the interior of Kirby Muxloe Castle, from the rear and looking towards the gatehouse and the west wing