Kintail is a mountainous area of Ross-shire and Inverness-shire. Much of the landscape is owned by the National Trust for Scotland.

The area is known chiefly for the Five Sisters Of Kintail (Gaelic: Còig Peathraichean Chinn Tàile, although not a name derived from Gaelic, it has individual names for each of the five sisters: 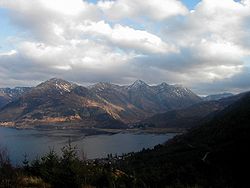 These mountains form a high ridge some five miles long rising steeply from Glen Shiel to a maximum height of 3,501 feet. The five distinctly pointed summits are a well-known landmark and a popular hillwalking expedition. Three of the Five Sisters, which are all over 3,000 feet, are classified as full Munros, with the other two being subsidiary Munro tops. The ridge containing the Five Sisters continues unbroken to the east where it takes in a further three Munros, often known as the Brothers. Beinn Fhada (Ben Attow) is the other main mountain in the area.

Most of Kintail is owned by the National Trust for Scotland. The Trust's Kintail and Morvich estate covers 29 square miles and includes the Falls of Glomach, one of the highest waterfalls in Great Britain. The estate was bought for the Trust in 1944 by Percy Unna, the Scottish Mountaineering Club president who also acquired Glencoe for the Trust.