Kingscourt, historically known as Dunaree[1] is a town in County Cavan. It is located near the Cavan-Meath border and has a population of over 3,000, making it the fourth largest town in County Cavan. The name Dunaree is from the Gaelic Dún na Rí, meaning "fort of the king".[1] The town was founded near the site of the old village of Cabra, by Mervyn Pratt, towards the end of the 18th century, and was completed by his brother, The Rev. Joseph Pratt.[2]

Cabra Castle, an early 19th-century 'Gothick-style' castle, is located very near the town, being on the R179 (known locally as the Carrickmacross Road). The castle was originally called Cormey Castle and was built on the site of an earlier Cormey Castle which had been destroyed during the Cromwellian War.[3] The castle has, in recent years, been restored and expanded and is now a five star hotel which is popular for weddings.

The local Catholic church, which is perched high above the town, contains some excellent stained-glass windows by the renowned artist Evie Hone, who also provided designs for Eton College Chapel.

Industry is very important to Kingscourt. Gypsum Industries, part of the Saint-Gobain group, is a major employer in the area, as is building supplies company, Kingspan, which is headquartered in the town. Other notable employers in the town include Kingscourt Brick, now part of the Lagan Group, Cabra Castle Hotel and Hangar Door Systems. Another employer in the town is The Dún a' Rí House Hotel, a small hotel on Station Road. The hotel has McMahon's Café Bar attached to it.

Like many small towns across Ireland, Kingscourt expanded rapidly during the 'Celtic Tiger' era of the second half of the 1990s and most of the 2000s (decade). 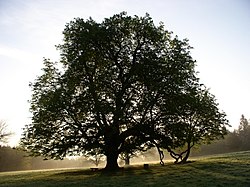 Dún na Rí Forest Park is located a couple of miles from Kingscourt. Situated in a valley, and formerly part of the Pratt family's Cabra Estate (which was centered on nearby Cabra Castle), Dún na Rí is home to stoat, hare, mink, rabbit and otter, as well as red and grey squirrel along the banks of the River Cabra. The park itself borders the Shercock and Carrickmacross roads. The original Cabra House (also sometimes known as Cabra Castle) was located within the modern forest park. The Pratt dynasty moved into the current Cabra Castle (which is just across the Carrickmacross Road from the forest park's main entrance) in 1813.

Kingscourt has a railway line which has been disused following strike action by Iarnród Éireann train drivers in 2001. The line ceased to have passenger services in 1947, and was then a freight only service. The line, which runs from Kingscourt to Navan and then on to Drogheda, was used to carry gypsum ore daily from Gypsum Industries, but the company withdrew this service when Iarnród Éireann could not guarantee deliveries of Gypsum ore, and was consequently transferred to road transport in 2001.

Kingscourt is approximately 30 minutes drive from the M1 motorway, via Ardee, County Louth, providing easy access to Dublin Airport (60 miles), Dublin city and its environs (55 miles), Drogheda (30 miles), Dundalk (22 mies) and Belfast (80 miles). Other nearby towns include Bailieborough, which is within 10 minutes driving time, and Carrickmacross, Navan and Kells, which are all within 35 minutes by road.

There are daily bus connections to Nobber, Navan and Dublin with both Sillan Tours Limited and Bus Éireann. On Tuesdays and Thursdays Bus Éireann provides a link to Cavan via Bailieborough and Stradone, County Cavan.

The Racquetball Association of Ireland is based in Kingscourt and the 14th IRF Racquetball World Championships took place in the town in 2008. Held every two years, previous Championships have been in such diverse locations as the Dominican Republic (2006), South Korea (2004) and Puerto Rico (2002).[4] In Gaelic Football, the Kingscourt Stars are the fourth most successful club in the county having won the Cavan Senior Football Championship eleven times, their most recent was in 2015. The Kingscourt Handball and Racquetball court complex is the largest in Ireland with three 40x20s and one 60x30 court.[5] Many important handball games and tournaments are held in the complex which also includes a gym. Kingscourt has a rich tradition of handball and the Handball Club is home to many All-Ireland champions. The club have won the Senior All-Ireland Club title twice; once in 2001 and again in 2003. The players involved were; Paul Brady, Michael Finnegan, Patrick Finnegan, Jimmy McKeown and Raymond Cunningham.[6]