Kincardine Castle stood two miles north-east of Fettercairn.[1] In 1296, King John I, John Balliol, wrote a letter of surrender from the castle to Edward I of England after a short war which marked the beginning of the wars of Scottish independence. The only visible sign of its previous existence is the ruin by the Devilly Burn below Strathfinella Hill, near the Mill of Kincardine which preserves its name, as does the shire.

The ancient Causey Mounth road was built on high ground to make passable this only available mediæval route from coastal points south to Aberdeen. This ancient passage specifically connected the Bridge of Dee to Muchalls Castle, Cowie Castle (and effectively Dunnottar Castle). The route was that taken by the Earl Marischal and Marquess of Montrose when they led a Covenanter army of 9,000 men in the first battle of the Civil War in 1639.[2] 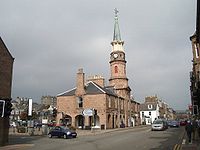 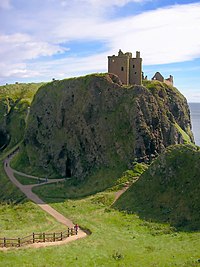