Kettlethorpe is a village in Lindsey, the northern part of Lincolnshire, standing ten miles west of the city of Lincoln. Two other villages, Drinsey Nook and Laughterton, are encompassed within Kettlethorpe's civil parish, the population of which taken at the 2011 census was 426.

Kettlethorpe parish church, St Peter and St Paul, dates from the 15th century with alterations in 1809 and the late 19th century, built of yellow brick, and limestone. It is and is a Grade II listed building.[1]

The ecclesiastical parish is Kettlethorpe with Fenton, part of the Saxilby Group of parishes. St Peter & St Paul in Kettlethorpe is the parish church. 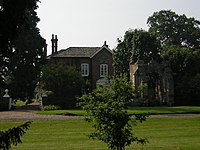 The moat surrounding Kettlethorpe Hall survives in part on all four sides of a rectangle and presumably is the remnant of the manor later held by the Swynford family in the 14th and 15th centuries, including Katherine Swynford, subsequent third wife of John of Gaunt, and Duchess of Lancaster and ancestress of all the Kings since Henry VII.[3]

Today the Hall is a small country house, dating from the early 18th century built by the M.P. Charles Hall who succeeded to the house in 1713. It then passed to the Amcotts family.[4] It was altered and extended in the 19th century. It is Grade II listed. A gateway to the Hall, dating from the 14th century with 18th-century additions and alterations, is Grade II* listed.[3][5]

There are earthwork remains of a mediæval deer park, enclosed about 1383 and dis-parked around 1830. In 1383 Katherine Swynford received a licence from King Richard II to enclose land and establish a park of 300 acres within her manor of Kettlethorpe.[6]

The settlement of Laughterton looks like a planned village, with properties of approximately equal depth on either side of a straight north-south street. Laughterton is always recorded with Kettlethorpe in tax returns.[7]