Kempston is a small town in Bedfordshire. Kempston serves principally as a dormitory town for Bedford and for Milton Keynes, which is about ten miles away. It is on the Great Ouse and in the Redbournestoke Hundred.

Kempston and had a 6th-century Anglo-Saxon burial site, now home to the Saxon Centre.

The meaning of the name Kempston is not known for certain. It is recorded as "camestone" in the Domesday Book. The element 'ton' is Old English for 'village', 'farmstead' or 'estate'. The initial 'Kemp' may be from a personal name or it has been suggested as from the ancient British language word meaning 'bent' or 'curved', in reference to the river here.

Until the 19th century Kempston was a mainly rural parish. It was one of the largest in Bedfordshire with an area of 5,025 acres at the time of enclosure in 1804, and was in. Historically there was no central village, but instead settlement was divided between a number of hamlets called "Ends", for example, Up End, Bell End, Wood End and Box End. Kempston's parish church, All Saints, was in Church End, which was not the largest end but is fairly central. In the 19th century East End, Bell End and Up End began to coalesce into a larger settlement.

In 1870 developers began to attempt to develop land on the road from Kempston to Bedford under the name "Kempston New Town". Construction was slow at first, but the new district soon began to expand steadily and Kempston acquired a more urban feel. In 1896 the parish was divided in two; Kempston Urban District and the Parish of Kempston Rural, which was sparsely populated. Church End, with its original parish church, remains a small hamlet in the rural part of Kempston.

After the 1931 census the population began to expand rapidly; the 1951 population of just under 10,000 was 60% higher that that of 1931 and in the second half of the 20th century, the population nearly doubled. 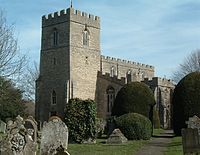 All Saints' Church in Church End

The original parish church is All Saints' Church, which stands in Church End. It is attractively situated in a green churchyard close to the river, and the location is still rural. William the Conqueror's niece Judith commissioned the west tower, nave and chancel in 1100. The tower arch and chancel arch remain from Norman times, and there are earlier, Anglo-Saxon, traces in the stonework. The aisles were added in the 13th century. In the 15th century the windows were replaced, the tower was heightened and the nave walls were also heightened, forming a clerestory. The font is 14th-century. Refurbishments were carried out in the 19th century, and the north and south galleries were added at that time to accommodate children.

In the 19th century two additional Church of England churches were built to accommodate the rising population: St John's in Up End was consecrated in 1868, though it soon suffered from subsidence, possibly caused by an underground stream. For Kempston New Town, St Stephen's was built in 1888 as a temporary iron church. After a member of the locally prominent Williamson family bequeathed £8,000 for the purpose in 1927 the Church of the Transfiguration was built in Bedford Road to replace two unsatisfactory Victorian churches. It is a solid work in red brick and was consecrated in 1940. St John's was unused as a church after that and was eventually demolished in 1965. St Stephen's was sold to the Saunders' leather factory on nearby College Street.

The first Methodist chapel in the parish was built in Bell End in 1839, and its capacity was expanded by adding a gallery in 1843. In 1860 a larger replacement was constructed in the High Street at a cost of £600. The modern Kempston West Methodist Church now stands on the site. Kempston East Methodist Church in Bedford Road was opened in 1904 to serve the new parts of Kempston in the direction of Bedford. Sir Frederick Howard donated the site and £1,000, the Twentieth Century Trust provided another £1,000 and a local appeal raised around £3,000. The church is an attractive Gothic building in pale rustic Weldon stone, and has a hammerbeam roof. In addition to the two mainstream Methodist churches a small Primitive Methodist chapel was built in Bedford Road in or soon after 1896, when a site was purchased for £65 2s. 6d. It became Newtown Methodist chapel after the merger of the various Methodist churches in the 1930s, but it was sold off in 1959 and used for business purposes.

Kempston abuts both John Bunyan's home parish of Elstow and Bedford, where he was imprisoned. The Bedford church now known as the Bunyan Meeting had members in Kempston from at least 1657, and ministers from the church sometimes preached in private houses in Kempston. The first Congregationalist church building in Kempston was opened in the High Street in 1813. A replacement church was built in Kempston New town in 1871. It was extended in 1888 and a hall was added in 1907.

A small Roman Catholic church was built in Bedford Road in the 1960s.