Difference between revisions of "Irvine, Ayrshire"

Irvine is a new town on the coast of the Firth of Clyde, in Ayrshire. It is however a very old new town: in the 12th century Irvine was Scotland's military capital and held the headquarters of the Lord High Constable of Scotland, Hugh de Morville. It also served as the capital of Cunninghame. The poet Robert Burns lived here for a time, after whom Burns Street and Burns Crescent are named.

Irvine was granted its first Burgh Charter around 1249, which entitled the town to organise its own affairs under a Town Council. Around 1372 a dispute arose between Irvine and Ayr as to which of the two burghs had rights to control trade in the Barony of Cunninghame and Barony of Largs. The Burgesses of Irvine were able to produce Royal Charters showing that the town had the right to control trade in the Baronies of Cunninghame and Largs. The dispute was resolved by Robert II's Royal Charter of 8 April 1372 conferring Royal Burgh status on Irvine.

There is a community council in Irvine. However, unlike counterparts elsewhere in Scotland, it opts not to use 'Royal Burgh of' in its title.

The motto used on the coat of arms of the Royal Burgh is 'Tandem Bona Causa Triumphat.' This means the Good Cause Triumphs in the end.

Part of modern Irvine contains the oldest continually inhabited village in Europe. Dreghorn, formerly a separate village, appears to contain archaeological remains dating back to the first incursions of man into the area in the mesolithic). Numerous ancient sites pepper the region. Iron Age Hill forts are abundant.

The Grannie stone (or Granny Stane) is described as "one of Irvine's prehistoric puzzles", this boulder is either left behind from the Ice Age or is the last remaining stone of a stone circle - others were removed, by blasting, after the Irvine weir was constructed in 1895, but popular protests saved this remaining stone. The Grannie Stane is visible when the water is low. 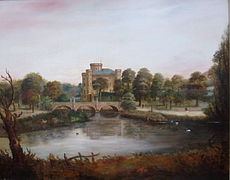 Eglinton Castle, home of the Earls of Eglinton, Circa 1830s 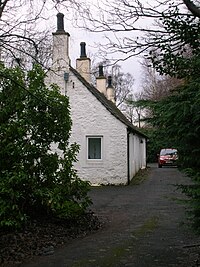 The mediæval parish of Irvine was one of the most important regions in Scotland. Originally the site of the Military Headquarters of the Lord High Constable of Scotland, it would later serve as home to no fewer than three kings. John I King of Scots inherited the lordship of Irvine sometime in the mid-13th century. Robert the Bruce, in an attempt to seize Balliol's lands, made sure that he secured the town. From Bruce it passed to his grandson Robert the Steward, future King Robert II of Scotland.

Irvine is the site of an incident during the Scottish Wars of Independence when an English army marched to Irvine to engage the Scottish army that was encamped at Knadgerhill, only to find that dissension amongst the Scots leaders was so great that armed conflict did not occur and many of the leaders changed sides and joined King Edward I.[1]

Bourtreehill, the only major estate in the parish, was periodically possessed by all three kings and the Constables of Scotland before them. 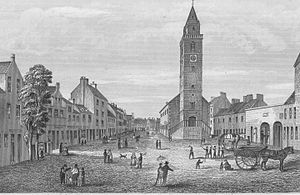 The harbour for Irvine has a long history and once was one of the most prominent ports in Scotland after Glasgow. Across from the main harbour itself there was a terminal for the ICI-Nobel Explosives plant on the River Garnock. Much of the harbour went into decline in the 19th century when Glasgow, Greenock and Port Glasgow achieved higher prominence as sea ports. Despite this, there was still commercial sea traffic, though the harbour went into further decline in the 20th century. The main shipping in the 20th century was light coastal traffic and vessels destined for the Nobel Explosives facility. This facility had its own quay, which, although now disused, is still visible from Irvine Harbour. A shipyard on the river, the Ayrshire Dockyard Company, remained active until after World War II, though its last ship was built just before the war.

Afterwards it was involved in refitting ships and also in the manufacture of fittings for other vessels including the Cunard liner Queen Elizabeth 2. Irvine Harbour is now officially closed as a commercial port and houses a small number of privately owned pleasure craft. It is also home to part of the Scottish Maritime Museum with numerous vessels on display, including the 'Spartan', one of the last surviving Clyde puffers.

Irvine Harbour is home to a unique and distinctive building which marked the tide level. It was built in 1906 and devised by Martin Boyd, the harbourmaster at that time. The automatic tide signalling apparatus indicated the tide's state in two ways depending on the time of day. During daylight, the level was marked with a ball and pulley system attached to the mast. At night, a number of lamps marked the tidal level. Unfortunately the building has fallen into some disrepair and the mast partially dismantled. There have been plans to try to refurbish this unusual building which so far, have come to nothing. 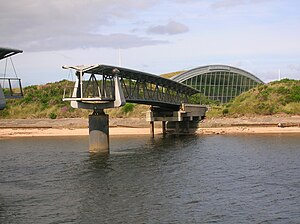 The old 'Big Idea' building and the footbridge.

The harbour and surrounding area became an area heavily blighted by industrial waste even long after some of the industries were gone. There was a waste bing known by the locals as 'The Blue Billy' due to the colour of the waste there. During World War II a Royal Observer Corps watchtower was sited here giving a wide overall view of the Firth of Clyde. It is also credited with the first visual sighting of Rudolf Hess's Messerschmitt 110 in 1941.

Irvine Harbour was a prime target for Adolf Hitler's proposed invasion of the British Isles, being a major boating district and also in near vicinity to the ICI weapons development plant.

The hulk of the historic clipper ship, City of Adelaide, was moved to a dry dock near the inner harbour in 1992.[http://cityofadelaide.org.au/content/view/46/90/ Clipper Ship 'City of Adelaide' - Timeline</ref> 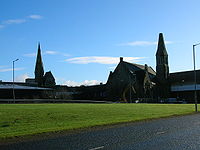 Irvine churches and the Rivergate Centre

Unlike most new towns which were either completely newly built or based around small villages, Irvine was already a sizeable town which had been a Royal Burgh since 1372. A quango, the Irvine Development Corporation (the IDC), was set up in the 1960s to oversee the development of Irvine as a 'new town'. The organisation was given the planning powers of the Royal Burgh of Irvine Town Council, Kilwinning Town Council and the Irvine Landward District Council. This involved massive and sometimes controversial development of the old parts of the town. Irvine was officially designated as a "New Town" in 1966, the fifth and last to be developed in Scotland and the only 'new town' to be located on the coast. The other Scottish 'New Towns' were East Kilbride, Glenrothes, Cumbernauld and Livingston.

The IDC was widely criticised for some of their actions including the demolition of large swathes of the Fullarton part of the town, the Bridge and most of Bridgegate in 1972 and 1973. One positive development of IDC's was the Irvine Beach Park from 1975 and the Magnum Leisure Centre opened in 1976. This area, behind the harbour had been largely industrial wasteland for many years and was regarded as an eyesore. The area was developed with vast amounts of greenery making it a pleasant place to walk. IDC, and also the Urban Regeneration Company, have plans to redevelop much of the waterfront area. Surrounding towns and villages along the coastline are included in a number of the regeneration proposals.

The new town designation was ended on 31 December 1996 under The New Town (Irvine) Winding Up Order 1993, which dissolved the Irvine Development Corporation returned full planning control to the local authority.