Ireland is the second largest of the British Isles, and the twentieth-largest island in the world.[1] Ireland lies to the west of Great Britain, which is just 12 miles away at the closest point, between the coast of County Antrim and the Mull of Kintyre. Between the two great islands lies the Irish Sea

Ireland is surrounded by hundreds of islands and islets, most along the storm-battered Atlantic west coast.

Relatively low-lying mountains surrounding a central plain epitomise Ireland's geography with several navigable rivers extending inland. The island has lush vegetation, a product of its mild but changeable oceanic climate, which avoids extremes in temperature. Thick woodlands covered the island until the 17th century. Today, it is the most deforested area in Europe.[2] There are twenty-six extant mammal species native to Ireland.

The island's geography has been compared to a dinner plate; high, coastal mountains and a low-lying interior which has causes the middle of the island to be poorly drained and with vast stretches of bog. The River Shannon is the major river, draining the centre of the island form the edge of Ulster out to the Atlantic Ocean at Limerick. Ulster has a separate drainage system; the River Bann and many other rivers sink into Lough Neagh in the centre, whence the Bann emerges again to flow due north to the Atlantic Ocean at Coleraine. 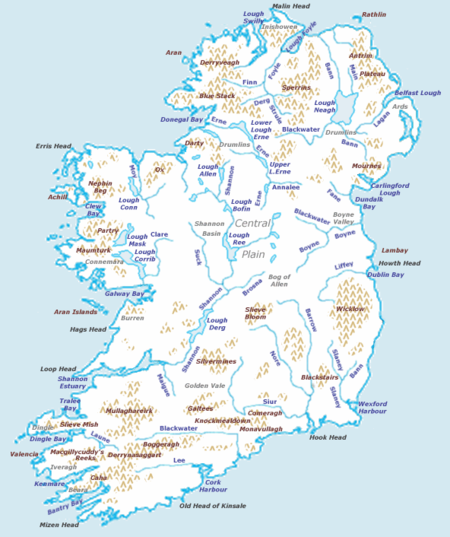 A ring of coastal mountains surround low plains at the centre of the island. The highest of these is Carrauntoohil in County Kerry, which rises to 3,406 feet above sea level.[3]

The most arable land lies in the province of Leinster.[4] Western areas can be mountainous and rocky with green panoramic vistas. The River Shannon, the island's longest river at 240 miles long, rises in County Cavan in the north west and flows to Limerick city in County Limerick in the mid-west to open inot a broad estauary.[5]

The island's lush vegetation, a product of its mild climate and frequent rainfall, earns it the sobriquet the Emerald Isle. Overall, Ireland has a mild but changeable oceanic climate with few extremes. The climate is typically insular and is temperate avoiding the extremes in temperature of many other areas in the world at similar latitudes.[6] This is a result of the moderating moist winds which ordinarily prevail from the South-Western Atlantic.

Rain falls throughout the year but is light overall, particularly in the east. The west tends to be wetter on average and prone to Atlantic storms, especially in the late autumn and winter months. These occasionally bring destructive winds and higher total rainfall to these areas, as well as sometimes snow and hail. The regions of north County Galway and east County Mayo have the highest incidents of recorded lightning annually for the island, with lightening occurring approximately five to ten days a year in these areas.[7] Munster, in the south, records the least snow whereas Ulster, in the north, records the most. 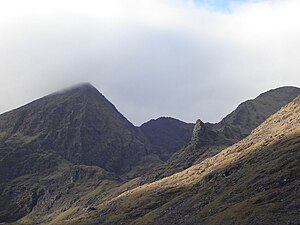 Carrauntoohil the highest peak in Ireland at Macgillycuddy's Reeks.

The island consists of varied geological provinces. In the far west, around County Galway and County Donegal, is a medium to high grade metamorphic and igneous complex of Caledonide affinity, similar to the Scottish Highlands. Across southeast Ulster and extending southwest to Longford and south to Navan is a province of Ordovician and Silurian rocks, with similarities to the Southern Uplands province of Scotland. Further south, along the County Wexford coastline, is an area of granite intrusives into more Ordovician and Silurian rocks, like that found in Wales.[8][9] In the southwest, around Bantry Bay and the mountains of Macgillicuddy's Reeks, is an area of substantially deformed, but only lightly metamorphosed, Devonian-aged rocks.[10] This partial ring of "hard rock" geology is covered by a blanket of Carboniferous limestone over the centre of the country, giving rise to a comparatively fertile and lush landscape. The west-coast district of the Burren around Lisdoonvarna has well developed karst features.[11] Significant stratiform lead-zinc mineralisation is found in the limestones around Silvermines and Tynagh. 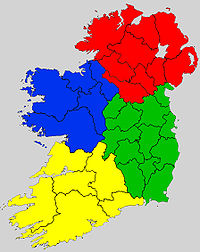 Traditionally, Ireland is divided into four provinces, and each county fits with a province:

Ulster is used as a by-name for Northern Ireland, though the traditional province contains three further counties (Cavan, Donegal and Monaghan) which chose in the 1920s to become part of the Irish Free State.

The system of counties developed between the 13th and 17th centuries,[12] 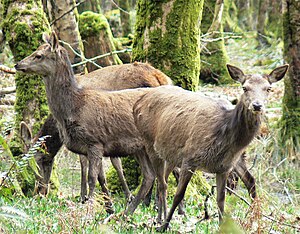 As Ireland was isolated from mainland Europe by rising sea levels after the ice age, it has less diversity of animal and plant species than either Great Britain or mainland Europe. There are 55 mammal species in Ireland and of them only 26 land mammal species are native to Ireland. Some species, such as the red fox, hedgehog and badger, are very common, whereas others, like the Irish hare, red deer and pine marten are less so. Aquatic wildlife, such as species of turtle, shark, whale, and dolphin, are common off the coast. About 400 species of birds have been recorded in Ireland. Many of these are migratory, including the Barn Swallow. Most of Ireland's bird species come from Iceland, Greenland and Africa.

Several different habitat types are found in Ireland, including farmland, open woodland, temperate broadleaf and mixed forests, conifer plantations, peat bogs and a variety of coastal habitats. However, agriculture drives current land use patterns in Ireland, limiting natural habitat preserves,[13] particularly for larger wild mammals with greater territorial needs. With no top predator in Ireland, populations of animals, such as semi-wild deer, that cannot be controlled by smaller predators, such as the fox, are controlled by annual culling.

There are no snakes in Ireland and only one reptile (the common lizard) is native to the island. Extinct species include the great Irish elk, the Irish wolf and the great auk. Some previously extinct birds, such as the Golden Eagle, have recently been reintroduced after decades of extirpation.

Until mediæval times, Ireland was heavily forested with oak, pine and birch. Forests today cover only about 9% (a million acres)[14] of Ireland, which makes it the most deforested area in Europe. Much of the land is now covered with pasture, and there are many species of wild-flower. Gorse (Ulex europaeus), a wild furze, is commonly found growing in the uplands, and ferns are plentiful in the more moist regions, especially in the western parts. It is home to hundreds of plant species, some of them unique to the island, and has been "invaded" by some grasses, such as Spartina anglica.[15] 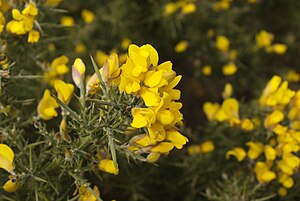 The algal and seaweed flora is that of the cold-temperate variety. The total number of species is 574 [16] and is distributed as follows:

The island has been invaded by some algae, some of which are now well established. For example:[17]

Codium fragile ssp. atlanticum has recently been established to be native, although for many years it was regarded as an alien species.

Because of its mild climate, many species, including sub-tropical species such as palm trees, are grown in Ireland. Phytogeographically, Ireland belongs to the Atlantic European province of the Circumboreal Region within the Boreal Kingdom. The island itself can be subdivided into two ecoregions: the Celtic broadleaf forests and North Atlantic moist mixed forests. 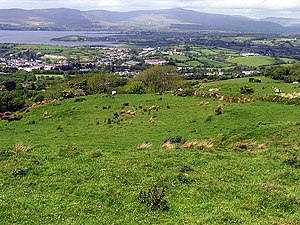 The long history of agricultural production, coupled with modern intensive agricultural methods such as pesticide and fertiliser use and runoff from contaminants into streams, rivers and lakes, impact the natural fresh-water ecosystems and have placed pressure on biodiversity in Ireland.[18][19]

A land of green fields for crop cultivation and cattle rearing limits the space available for the establishment of native wild species. Hedgerows however, traditionally used for maintaining and demarcating land boundaries, act as a refuge for native wild flora. This ecosystem stretches across the countryside and acts as a network of connections to preserve remnants of the ecosystem that once covered the island. Subsidies under the Common Agricultural Policy, which supported agricultural practices that preserved hedgerow environments, are undergoing reforms. The Common Agricultural Policy had in the past subsidised potentially destructive agricultural practices, for example by emphasising production without placing limits on indiscriminate use of fertilisers and pesticides; but recent reforms have gradually decoupled subsidies from production levels and introduced environmental and other requirements.[20]

Forest covers about 10% of the country, most of it designated for commercial production.[13] Forested areas typically consist of monoculture plantations of non-native species, which may result in habitats that are not suitable for supporting native species of invertebrates. Remnants of native forest can be found scattered around the island, in particular in the Killarney National Park. Natural areas require fencing to prevent over-grazing by deer and sheep that roam over uncultivated areas. Grazing in this manner is one of the main factors preventing the natural regeneration of forests across many regions of the country.[21]