The County of Huntingdon (abbreviated Hunts) is a shire between the Midlands and East Anglia. It is one of the smaller counties in Great Britain; in England only Rutland and Middlesex are smaller.

The county is roughly a rhombus shape, lying between bordering on Northamptonshire to the north and north-west, Bedfordshire to the south-west and Cambridgeshire to the east. The county town, Huntingdon, lies at the centre of the county.

Large areas of the county are extremely low-lying and Holme Fen is notable for being the United Kingdom's lowest point, at 9 feet below sea level. The county's highest point is Boring Field, near Covington at 263 feet above sea level; the lowest highest point of all the counties.

The Great Ouse cuts across the county, and three of the county's four towns stand on its banks. The Great Ouse enters Huntingdonshire at St Neots, flowing northward then eastward to Huntingdon and on to St Ives before leaving the county at Earith. At Earith the Ouse is briefly tidal, taking its tide from the Bedford Rivers.

The A1, on the route of the Great North Road, passes through Huntingdonshire close to its southernmost to its northernmost points and, the A14 crossing from east to west, Huntingdonshire has become a major transport hub, with development close to the major routes.

Southern Huntingdonshire has its main townscapes by the main roads, but away from those routes it is a rich agricultural landscape characterised by farming and picturesque villages.

North of Huntingdon lies the county's share of the Great Fen. Much of the land here is below sea level and the landscape in the northeast in particular presents a vast, flat appearance. There are many small, pretty hamlets and villages scattered across the fen, the only town of any size south of the Peterborough suburbs being Ramsey.

Huntingdonshire County Cricket Club has its main ground in Godmanchester. It is the only county cricket club to be classed as neither a first class county nor a minor county.

Huntingdonshire claims to be the birthplace of bandy, a form of ice-hockey, now an IOC accepted sport.[1] According to documents from 1813, Bury Fen Bandy Club was undefeated for 100 years. A member of the club, Charles Tebbutt, wrote the first official rules down in 1882 and was instrumental in spreading the sport to many countries.[2] 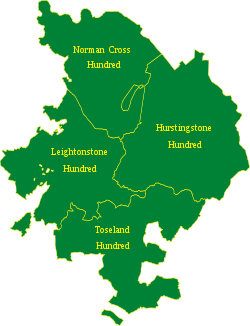 The hundreds of Huntingdonshire

The county is divided into four hundreds plus the borough of Huntingdon in the centre, locally in Hurstingstone hundred.