Hove is a town of Sussex, on the south coast, immediately to the west of its larger neighbour, Brighton, with which it forms a single urban mass and city. The conurbation stretches along the coast to include Hove, Brighton and some smaller coastal towns and villages. To the east of Hove is Portslade-by-Sea.

The town is humorously known as "Hove Actually", from the phrase heard frequently in such variants as "You live in Brighton? Well, Hove, actually". To outsiders the difference between the towns may be an unfamiliar distinction, but Brighton has certain louche reputation, and an air of oddity brought by the counter-culture which prevails there, while Hove strives to be more genteel.[1] One source has identified the locally resident actor Laurence Olivier as the origin of the phrase.[2]

In the 1990s the Hove borough council used the slogan "Hove, Actually" to promote the town for tourism.[3]

During 19th-century building work near Palmeira Square, workmen removed a significant burial mound. A defining point on the landscape since the 13th century BC, this 20-foot-high tomb yielded – amongst other treasures – the Hove amber cup. Made of translucent red Baltic Amber and approximately the same size as a regular china tea cup, the artefact can be seen in Hove Museum.

Hangleton Manor is a 16th-century flint manor building, very well preserved. It is believed to have been built circa 1540 for Richard Bellingham, twice Sheriff of Sussex, whose initials are carved into a fireplace, and whose coat of arms adorns a period plaster ceiling. The Manor is currently serving as a pub-restaurant and is surrounded by the 20th Century Hangleton housing estate. 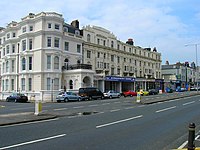 As Brighton rose in the Regency Period and afterwards, so Hove grew too. The Brunswick estate on and near the seafront in the east of Hove is made up of large Regency houses. This area was developed far from the original settlement, deliberately on the edge of Brighton, as a fashionable resort in the early 19th century, during the period of influence of King George IV, who famously commissioned Brighton's Royal Pavilion. The Brunswick estate originally boasted its own police, riding schools, and a theatre, which it retains. Further west, the seafront forms the end of a series of avenues, named in numerical order beginning with First Avenue, which are mostly composed of fine Victorian villas built as yet another well-integrated housing scheme, featuring mews for artisans and service buildings. Grand Avenue, The Drive, and the surrounding avenues were developed through the 1870s and 1880s, with many of the buildings in this area constructed by William Willett.

Hove's wide boulevards are in contrast to the bustle of Brighton, although many of the grand Regency and Victorian mansions have been converted into flats. Marlborough Court was once the residence of the Duchess of Marlborough, aunt of Winston Churchill. The Irish nationalist leader and Home Rule MP Charles Stewart Parnell once lived with his paramour Kitty O'Shea at Medina Villas in Hove. 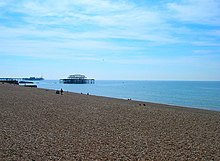 Much 1950s housing redevelopment in Hove took place on the outskirts of west Hove, Hangleton and the Knoll estate. This was mostly in the form of terraced and semi-detached council housing.

Hove's seafront and beach, particularly the area starting on the west side of Brighton's West Pier (though the first 300 yards are in Brighton) have recently become fashionable after some years of decline during the 20th Century. The same is certainly true of the houses of the developments mentioned above, most of which now command relatively high prices, having been in some cases very run down during the 1950s and 1960s.

The home of Sussex County Cricket Club is at County Cricket Ground, Hove. It is used for county, national and international matches, music concerts, fireworks displays, and has found resurgent popularity with the introduction of Twenty20.

There are a number of parks in Hove including Hove Park and St Anne's Well Gardens. The King Alfred Centre which is currently a leisure centre with swimming pool on the seafront. In March 2007 Brighton and Hove City Council gave planning permission for a £290 million pound development on the site. It has been designed by the renowned Canadian architect Frank Gehry who also designed the Guggenheim Museum in Bilbao, Spain. This project was scrapped in January 2009 when the developer pulled out.

The Monarch's Way long-distance footpath threads south-eastwards across the town from the Downs, before heading west along the seafront towards its terminus at Shoreham-by-Sea.