Difference between revisions of "Horspath"

Horspath is a village in Oxfordshire about three and a half miles east of the centre of Oxford, the county town. The 2011 Census recorded the parish's population as 1,378.

The parish's western boundary largely follows the course of a Roman road that linked Dorchester on Thames and Alchester Roman Town. In the Romano-British period there were pottery kilns producing Oxfordshire red/brown-slipware at Horspath Open Brasenose. Production of red slipware had begun by about AD 240 and continued until the end of 4th century. Production at the Horspath kiln was from the mid-3rd century until the 4th century.

A wide range of red-slipped tables wares, often decorated with rouletting, stamps or white slip, was produced in the Oxfordshire potteries and widely distributed across Britain during the 3rd and 4th centuries AD. A Romano-British pottery mould has been found at Horspath and Roman pottery has been found on the allotments and on the common to the north of the village.[1]

In the Middle Ages there were originally two distinct hamlets: Upper or Old Horspath and Nether, Lower or Church Horspath. The old packhorse road joining the London Road through the neighbouring village of Wheatley gave the village the Old English name Horspaþ', which became "Horsepath."[1] Finally, in 1912 the Parish Council changed the village's name to the unique form "Horspath."

Horspath parish was once part of the mediæval Royal Forest of Shotover, with dense woodland cover extending from Islip to Cuddesdon until "disafforestation" in 1660.

The Domesday Book of 1086 records that the Norman baron Roger d'Ivry, who had numerous estates in Oxfordshire, held an estate of five and a half hides at Horspath. This, along with many other d'Ivry estates, became part of the Honour of St Valery (in Normandy), and then passed to the Honour of Wallingford and from 1540 the Honour of Ewelme.[1]

Three Oxford University colleges: Corpus Christi, Magdalen and Brasenose. have owned land and property in the parish. A connection with Queen's College comes from the 15th century when student John Copcot, walking in Shotover Forest reading his Aristotle, was attacked by a wild boar. He thrust the volume down the animal's throat and 'the boar expired'. The college ceremony of carrying in the Boar's Head at Christmas is derived from this, as is the stained glass window in St Giles church, presented in 1740 by the President of Magdalen to commemorate the Copcot Legend.

The oldest part of Horspath manor house was built for William Bedyll shortly before 1513. The southern front is late Elizabethan and includes a staircase and four fireplaces built in about 1600. The eastern part of the house was designed by the architect John Malcolm and added in 1885.[1][2]

There is a legend (inevitably to support as 'Grey Lady' ghosts story that a lady of the house was killed by her husband in a quarrel, her body was placed in a priest hole. Sightings of a ghost became popular and in December 1878 a first-class shot claimed he had fired three times at the figure, and found two bullets embedded in the wall.

"HORSEPATH, a village and a parish in Headington district, Oxford. The village stands under a hill, 2 miles W by S of Wheatley railway station, and 4 ESE of Oxford. The parish includes also the hamlet of Littleworth. Post town, Wheatley, under Oxford. Acres, 1,164. Real property, £1,840. Pop., 334. Houses, 71. The manor belongs to the Earl of Macclesfield. The living is a vicarage in the diocese of Oxford. Value, £91. Patron, Magdalen College, Oxford. The church is ancient; consists of nave and chancel with a tower; and has, in its tower wall, two rude figures, said to be those of its founders."[3]

In the 18th century, Magdalen College and the Earl of Abingdon contributed to the building of a west gallery in the nave. 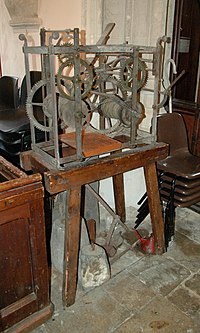 By 1840 the east wall of the chancel was out of alignment so the chancel was demolished and rebuilt to designs by the architect Henry Jones Underwood, who retained the Perpendicular Gothic side windows with their mediæval stained glass but dispensed with the mediæval roof and replaced the Early English east windows with a neo-Perpendicular one. A contemporary condemned this work as "wanton destruction".[1]

By 1849 the nave was dilapidated so in 1852 the clerestory and west gallery were removed, the north wall was rebuilt and the north transept was added. Once again Underwood was the architect. The work cost £800, of which Baker Morrell of the local Morrell brewing family and Magdalen College each paid £200.[1]

The church is a Grade II* listed building.[5]

St Giles has a disused turret clock without a dial, the frame of which appears to be late 17th century.[6]

In 1451 the Crown granted the advowson to the Hospital of St John the Baptist outside the East Gate, Oxford. In 1456 the hospital was suppressed, and all its property granted to Magdalen College, Oxford, newly founded by William Waynflete. From then until 1950 the vicar of St Giles was always a member of the college. George Wilkynson, who was incumbent from 1483, was Dean of Divinity of the University of Oxford.[1]

In the 19th century a Methodist congregation developed in the village. It met in people's homes until 1871 when the current brick-built chapel just west of the village green was completed and opened.[1] It was a member of The Oxford Methodist Circuit of the Methodist Church of Great Britain. In 2014 it ceased to be used for worship. The village community has bought the building and converted it into "Horspath Community Hub".[7]

In the western part of the parish, between Horspath village and the Roman road, is Bullingdon Green. Some weeks after the Battle of Edgehill in 1642 the Royalists disarmed the county's trained bands here. In 1644 Sir Arthur Aston, the Royalist Governor of Oxford, was thrown from his horse and injured here when "kerveting on horseback . . . before certain ladies". Aston's successor Sir Henry Gage reviewed Royalist troops here in the presence of Charles I. As the war turned against the Crown, Parliamentary troops assembled here in 1644 under the Earl of Essex and again in 1645. In 1648 George Nicolson, vicar of St Giles, was deprived of his demyship to Magdalen College for abusing Parliamentary soldiers.[1]

In 1864 the Wycombe Railway was built and opened through the parish, including the 524-yard long Horspath Tunnel between Horspath village and the hamlet of @Littleworth.[8]

The Great Western Railway took over the Wycombe Railway in 1867 and opened Horspath Halt in 1908. The halt was closed in 1915 but reopened in 1933. In 1963 British Railways withdrew passenger services between Princes Risborough and Oxford and closed the halt.