Holyhead is the largest town in the county of Anglesey. It is a major port serving ships from Ireland.

Despite being by far the county's largest town, with a population of 11,237[1], Holyhead is neither the county town nor is it actually on the island of Anglesey, but on Holy Island. Holy Island was originally connected to Anglesey by the "Four Mile Bridge", so called because it was four miles from Holyhead, but in the mid 19th century, John Stanley, 1st Baron Stanley of Alderley, a local philanthropist, funded the building of a broad causeway. The causeway, known locally as "The Cob", now carries the A5 trunk road and the railway line to Holyhead. A more recent causeway running parallel to The Cob carries the A55 dual carriageway.

The Port of Holyhead has a busy ferry port, handling more than 2 million passengers each year passing across the Irish Sea.[2] Stena Line and Irish Ferries both operate from the port. Ferries sail to and from Dublin and Dún Laoghaire in County Dublin, and these routes forms the principal link for surface transport from England and Wales to Ireland.

Archaeological evidence suggests that people have been sailing between Holyhead and Ireland for 4,000 years, but Holyhead's sudden growth in the nineteenth century arose from improved transport links built as a consequence of the Acts of Union 1800, uniting Great Britain and Ireland. Holyhead's two and a half mile breakwater, widely acknowledged to be one of Britain's finest, creating a safe harbour for vessels caught in stormy waters on their way to Liverpool and the other industrial ports of Lancashire. Holyhead's sea heritage is remembered in a maritime museum.

The post road built by Thomas Telford from London strengthened Holyhead's position as the port from which the Royal Mail was dispatched to and from Dublin on the mail coach. Telford's road of 1821 (now the A5) began in Holyhead and ran all the way to London. In 2001, work was completed on the extension of the A55 "North Wales Expressway" from the Britannia Bridge to Holyhead, giving the town a dual carriageway connection to the main British motorway network.

In 1839 Holyhead lost the London to Dublin Mail contract to the Port of Liverpool, when the railway from London to Liverpool was completed. When the Chester and Holyhead Railway was completed in 1850, the Irish Mail returned to Holyhead. Holyhead is currently the terminus of the North Wales Coast Line. 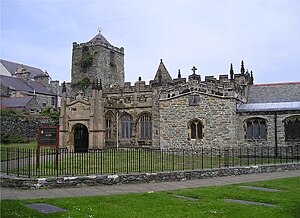 Remains have been found of settlements in the area from prehistoric times; circular huts, burial chambers and standing stones are found in the highest concentration in Britain. Mynydd y Tŵr is a prehistoric hillfort on Holyhead Mountain.

The Romans built a watchtower within Mynydd y Tŵr and a fort in what is now Holyhead; one of Europe's only three-walled Roman forts (the fourth side being protected by the sea, which used to come up to the fort).

The town centre is built around St Cybi's Church, which is built inside the Roman fort.