Hemingby is a dispersed village and parish in the Lindsey part of Lincolnshire. It is situated approximately three miles north of the market town of Horncastle and just west of the junction of the B1225 and A158 roads. It is surrounded by the villages of Baumber, Goulceby and West Ashby. The River Bain and its tributary, the Hemingby Beck, flow through the village.

Hemingby Grade-II-listed Anglican parish church is dedicated to St Margaret.[2] Originating in the 14th century it was rebuilt in 1764, and again in 1895.[3] 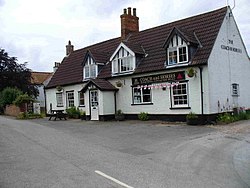 The Coach and Horses, Hemingby

In 1885 Kelly's noted that one of the principal landowners was Earl Manvers. The parish was of 2,527 acres and chief agricultural production was of barley and turnips. A then-reported 1859 Weslyan Methodist chapel building still exists.[4] A free school was founded in 1727 by Jane Lady Dymoke; her endowment provided for the employment of a school master and mistress, and for the clothing and apprenticeship of school children. She also established four almshouses for poor widows;[5] these are today listed buildings.[6] Further listed buildings are the late 18th-century Rookery cottage,[7] and the mid-18th-century Old Rectory[8] with its early 19th-century coach house.[9]

The Methodist chapel existed as such until 1978, the building being converted to a private house in 2007.

The village Coach and Horses public house is a former coaching inn on the old Louth to Lincoln coaching route.