Hatford is a small village in northern Berkshire in a parish of some 1,000 acres lying in the Vale of White Horse.

There is no shop in the village and no public house. Its one off-licence was bombed during the Second World War and never reopened.

The sandstone soil is a rich source of sand and gravel. Sand has been extracted here for many years and it was during quarrying, between 1937 and 1958, that an early Iron Age settlement was discovered. The lane leading north out of the village is called Sandy Lane. 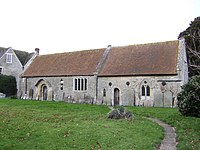 Hatford has had two parish churches. After serving the village for almost a century, the later church, Holy Trinity became dilapidated and was finally deconsecrated and sold in 1972, for use as a private dwelling. The older church, Saint George's, was reopened in the same year, reroofed in 1973 and reglazed in 1974, once more to assume its role as the place of worship for the village.

St George's stands on the site of the Anglo-Saxon church mentioned in the Domesday Book of 1086. It is mostly Early English Gothic, with a Norman south doorway to nave and chancel arch and a Norman font. One Saxon window is still visible. There is a sundial carved into the stone near the doorway. This old church is famous for being the scene of the marriage between Anne Dudley, the widowed Countess of Warwick, and Sir Edward Unton of Wadley House on 29 April 1555. The lady was the daughter of Edward Seymour, the Duke of Somerset and niece to Jane Seymour, who married King Henry VIII.

A Bronze Age spearhead found near the river Hat speaks of early habitation. Signs of an early Iron Age settlement have also been found and there is thought to have been at least one Roman villa, in fields next to the present village. Despite its long history, the population of Hatford has not changed much in size since the time of the Domesday Book, when it had some 120 residents.

The manor house, next to St George's parish church, has an 18th-century front but parts of the house date from the 15th century or even earlier. It stands at the western approach to the village and has an uninterrupted view of the Berkshire Downs and the Uffington White Horse. On the other side of St George's is the rectory. Next to the rectory, facing the B4508 road through the village, is Hatford Cottage, which was converted into a single house from a row of very early cottages. It was an antique shop in the 1960s.

In 1643, during the English Civil War, the parish register records the burials of two soldiers killed in action.

The old village off-licence received a direct hit from a German bomb in September 1940. One village girl was killed and two young London boys, who had been evacuated to stay with their grandparents, in order to escape the Blitz.

The Wiltshire thresher turned poet, Stephen Duck, worked here in the early 19th century and commemorated life on a Hatford Farm in one of his last poems.