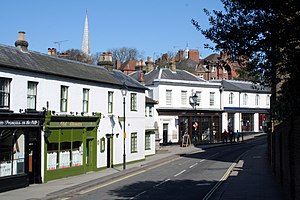 Harrow on the Hill

Harrow is a suburban area of Middlesex encompassing a number of contiguous towns and suburbs. Its centre and foundation is the town of Harrow on the Hill, where the famous public school stands, but additional town growth and the creation of new suburbs has proceeded since the nineteenth century, leaving Harrow on the Hill surrounded by them without obvious division, all of which may together be seen as a somewhat amorphous area known as "Harrow".

The extensive grounds of Harrow School and the hill are a welcome green space which serves to separate Harrow from Wembley and its own mini-conurbation to the south.

Harrow may be considered to consist of: