Happisburgh is a village and parish in the Happing hundred of Norfolk. The village is on the coast, to the east of a north-south road, the B1159 from Bacton on the coast to Stalham. It is a nucleated village. The nearest substantial town is North Walsham, six miles to the west.

Happisburgh became a site of national archaeological importance in 2010 when flint tools over 800,000 years old were unearthed. This is the oldest evidence of human occupation anywhere in the UK.[1] In May 2013, a series of early human footprints were discovered on the beach at the site, providing direct evidence of early human activity at the site.[2]

The parish shrank by over 50 acres in the 20th century by the erosion of its beaches and low cliffs. Groynes were constructed along the shore to try to stop the erosion. In the 2001 census, before the separation of Walcott to the north-west, the civil parish (which also includes the settlements of Happisburgh Common and Whimpwell Green) had a population of 1,372 in 607 households.

In 1086 the incoming Norman aristocracy had a simple church built on the site of the current tall stone one. It was demolished and rebuilt in the 15th century. The tower of St Mary's church is an important landmark to mariners as it is a warning of the position of the treacherous nearby sandbanks. In 1940 a German bomber released a trapped bomb from its bays during its return to Germany and the shrapnel from the bomb can still be seen embedded in the aisle pillars of the church. The church's octagonal font, also of the 15th century, is carved with figures of lions and satyrs.[3][4]

The red-and-white striped lighthouse, ½ mile to the south of the church is the only independently operated lighthouse in Great Britain and is the oldest working lighthouse in East Anglia having been constructed in 1790. It is open to the public on occasional Sundays during the summer.[5]

In 1866 the first lifeboat house was built on the cliffs above Old Cart Gap at a cost of £189. Its building here was prompted by its proximity to the treacherous Haisborough Sands. It closed in 1926 and the lifeboat was withdrawn.[6]

A small boathouse was built in a similar site (52°49’28"N, 1°32’10"E) during 1965 to house a D-class inshore lifeboat that went into service in June of that year. In 1987 the boathouse was replaced by a new, more modern building with better facilities for crews. This was further extended in 1998. A new D-class lifeboat, Colin Martin, was placed on service on 13 September 1994.[6]

In December 2002 the lifeboat launching ramp was washed away due to massive erosion. A temporary station was opened within three months at Old Cart Gap. The original station is now used for training and souvenir sales.[6][7]

On 22 October 2003 a new D class lifeboat D-607 Spirit of Berkhamsted was placed on service.[6][7] The station has been honoured with an RNLI Silver Medal.[6]

The main land use is a private garden to the homes here forming an ornate 19th century estate on the site of fields until the middle of that century. The estate is central and towards the coast from the kinked village street. The main house which was thatched from local reeds was worked up by Detmar Blow from an initial detailed design by Ernest Gimson with whom Blow had collaborated with at Stoneywell. Blow was responsible for practical architectural changes to the initial design and overall architectural management of the build during the period 1900 - 1902 with his 'leading man' Frank Green from East Knowle supervising on the spot. It is pretty certain that Gimson supplied the interior timbers fittings and in particular the complicated timber roof structure. It is mainly a Grade-II-listed (starting category) listed park and garden, having been designed as an Arts and Crafts movement garden by Detmar Jellings Blow to accompany the butterfly-plan summer home for wealthy landowner Albermarle Cator seated at Woodbastwick Hall, Woodbastwick who decided to build homes or gatehouses for his family. The north end of the largest, his home, was destroyed by a bomb — restored by Christobel Tabor (née Cator) after the war. The Cators sold the site in 1969 at which time the three houses of St John's, St Anne's and St Mary's came into separate ownership.[8] The restored main home is Grade II* listed, which is the middle category.[9] 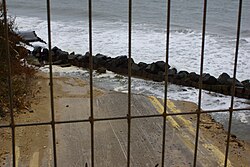 Road in Happisburgh that was washed away by coastal erosion.

The coastal part of the village is subject to frequent coastal erosion: houses that usedto be over 20 ft from the sea now sit at the edge of a cliff and are expected to fall into the sea. Sea defences were built in 1959 to slow the erosion. Changes in government policy mean that coastal protection in Happisburgh is no longer fundable from central government. The road (Beach Road) that leads into the sea is being constantly eroded, and the nearest houses shown in the adjacent photograph have now been demolished as part of a coastal management scheme (2013).[citation needed]

In 2010, Simon Parfitt and colleagues from University College London discovered flint tools near Happisburgh.[1] The tools were dated to "somewhere between 866,000 to 814,000 years ago or 970,000 to 936,000 years ago",[10] around 100,000 years earlier than the finds at Pakefield. The flints were probably left by hunter-gatherers of the human species Homo antecessor who inhabited the flood plains and marshlands that bordered an ancient course of the river Thames. The flints were then washed downriver and came to rest at the Happisburgh site.[11] In May 2013 the oldest human footprints outside of Africa, being more than 800,000 years old, were reported to have been discovered on the beach.[2]

There is a local legend dating from the 16th century that Happisburgh is haunted by the ghost of a murdered smuggler. The ghost was reported as having no legs, and its head hanging behind its back by a thin strip of flesh. The legend says that the smuggler's mutilated body was found in a well.[12]