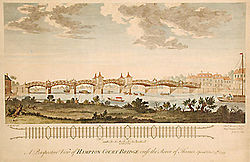 Engraving by Charles Grignion the Elder (after A. Heckel) of the 1753 bridge 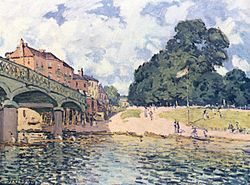 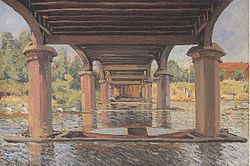 Hampton Court Bridge crosses the River Thames approximately north–south between Hampton, Middlesex and East Molesey, Surrey. It is the upper of two road bridges on the reach above Teddington Lock and downstream of Molesey Lock.

The location of the bridge had been a ferry crossing point since at least the Tudor period.

The first bridge was built from 1752 until 1753 and opened in December that year, after a 1750 parliamentary bill agreed on the construction of a privately owned bridge by James Clarke. It had seven wooden arches and was built in the Chinoiserie design of the Willow pattern that was popular at the time, attested by two prints made in the year of its opening and the year after.[1]

This bridge was replaced by a more sturdy eleven-arch wooden bridge in 1778.[1] By 1840 this bridge had become dilapidated and the owner appealed to the Corporation of London to support reconstruction. Among their arguments were that since the bridge was built, the City had created Molesey Lock and Weir and as a consequence navigation through the bridge was dangerous. The bridge was described at about this time as "crazy, hog-backed, inconvenient and obstructive of the navigation".[2]

From 1864 to 1865 construction took place of the third bridge on the site. It was built to a design by E. T. Murray and commissioned by the bridge's owner Thomas Allan. The new bridge consisted of wrought-iron lattice girders resting on four cast-iron columns. The road approach was between battlemented brick walls. An illustrative fragment of these approach walls remains on the south bank immediately west of the bridge. The design was heavily criticised; it was described simply in 1911 by one Historic Gazetteer, the Victoria County Histories as "inartistic".[1] A less diplomatic contemporary commentator called it "one of the ugliest bridges in England, and a flagrant eyesore and disfigurement both to the river and to Hampton Court."[3] Despite the criticism, it proved extremely lucrative for Allen, earning him over £3,000 annually in tolls until he was bought out in 1876 for £48,048 by a joint committee of the Hampton and Molesey Local Boards and the Corporation of London.[3]

The modern bridge is the fourth on the site. The bridge has three wide arches, is designed to be able to carry quite heavy motorised road traffic and is constructed of reinforced concrete, faced with red bricks and white Portland Stone (namely its pontoons, dressings and balustrades).[4]

The bridge was one of three authorised by Parliament in 1928 (the others being Twickenham Bridge and Chiswick Bridge).[5] It was designed by the Surrey county engineer W. P. Robinson and the architect Sir Edwin Lutyens to reflect the style of the portions of Hampton Court Palace designed by Sir Christopher Wren — whose architectural style has another legacy by the bridge, as his well-conserved blue-plaqued house in which he lived his final years faces the roundabout by the two north bank roads which meet just north of the bridge and palace front gate.[6] To ensure that traffic could still cross, the new bridge was built a short distance downstream from the old, which was subsequently demolished.[5]

Construction began in September 1930.[5] The work required the demolition of a small hotel (The Old Castle) and, to the south, diversion of the flow of the River Mole into the River Ember, formerly the secondary distributary of the Mole. The bridge was opened by the Prince of Wales (who became King Edward VIII) on 3 July 1933, on the same day as the opening of Chiswick and Twickenham Bridges, which carry the A316 (and between those sections is still occasionally nicknamed the 'Richmond bypass'). The bridge was Grade-II listed in 1952 for its architecture.[4][7]

Aside from two parallel lines of architecturally rich buildings and riverside homes – approximately half of which are listed on the north bank[6] are Hampton Court Palace and Gardens, Hampton Court Park and Bushy Park Royal Parks.

On the south bank is a one-way street of restaurants, boutiques and bars surrounded by apartments immediately, then homes with gardens west of Hampton Court railway station. On the Thames itself, a few hundred yards to either side are Molesey Lock on the Thames and the mouth of the River Mole, on the south side.

The bridge construction was taken as the opportunity for Surrey Council to construct a new road, which starts as the same road as before with its roundabout with the A308 (Staines–Kingston road) (then running south between the palace's entrance driveway and a short row of a hotel/restaurant, a restaurant and shop), before becoming being considerably straighter than the existing old roads as a route south. This connects directly with the A307 (Old London–Portsmouth road) and more recently with the A3(M) motorway deeper into Surrey than the old route.

The A3050 commences immediately south-west of the bridge and passes through three riverside settlements: the rest of Molesey and the towns of Walton-on-Thames and Weybridge also in Elmbridge, Surrey.

The next bridge downstream is a mile and a half away and upstream is exactly four miles distant.

The next downstream bridge has considerably older predecessors going back to the early mediæval period and is the only other of the reach, Kingston Bridge — it is pale brick and stone only and of taller design with two extra arches.

The next bridge upstream was replaced in 2013 with a single-span bridge heading up the Thames, a tied-arch bridge, Walton Bridge.