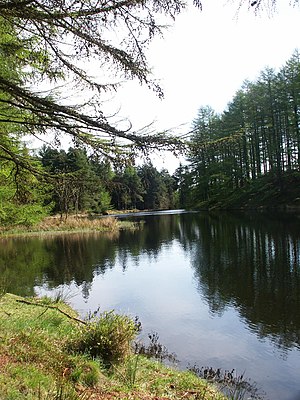 The Grizedale Forest is an area of hill and woodland spread over 9½ square miles which form the eastern edge of the Furness Fells in Lancashire, within the Lake District. The forest is east of Coniston Water and west of Windermere, and to the south of Hawkshead.

The Grizedale Forest is a great contrast to the neighbouring parts of High Furness; the Coniston Fells to the west are grim, austere slopes, scoured by the wind and empty of houses, while the forest is gentler and has villages and hamlets within it.

The highest point within Grizedale Forest is Carron Crag at 1,030 feet, overlooking a wooden panopticon sculpture.

The forest spreads across a number of hills, dotted amongst which are small tarns and the villages of Grizedale and Satterthwaite. The Forestry Commission owns and manages the forest lands. This is a popular tourist destination, strung with waymarked footpaths, mountain biking trails, an aerial assault course, a 16-bed hostel, and a visitor centre with a children's playground, education centre, café and shop. The forest is also used for two annual rallies: the Malcolm Wilson Rally and the Grizedale Stages Rally, based in Coniston

At the forest along the trail there is a high ropes course wich consists of ziplines, rope crossings and tarzen swings. There is a 12-year old age limit and a minimum height requirement of 4 ft 7 inches.

Scattered throughout the forest are approximately 90 sculptures, often made from naturally occurring materials such as stone and wood. The project to place sculptures in the forest was started by the Grizedale Society in 1977 and won the 1990 Prudential Award for the Arts..